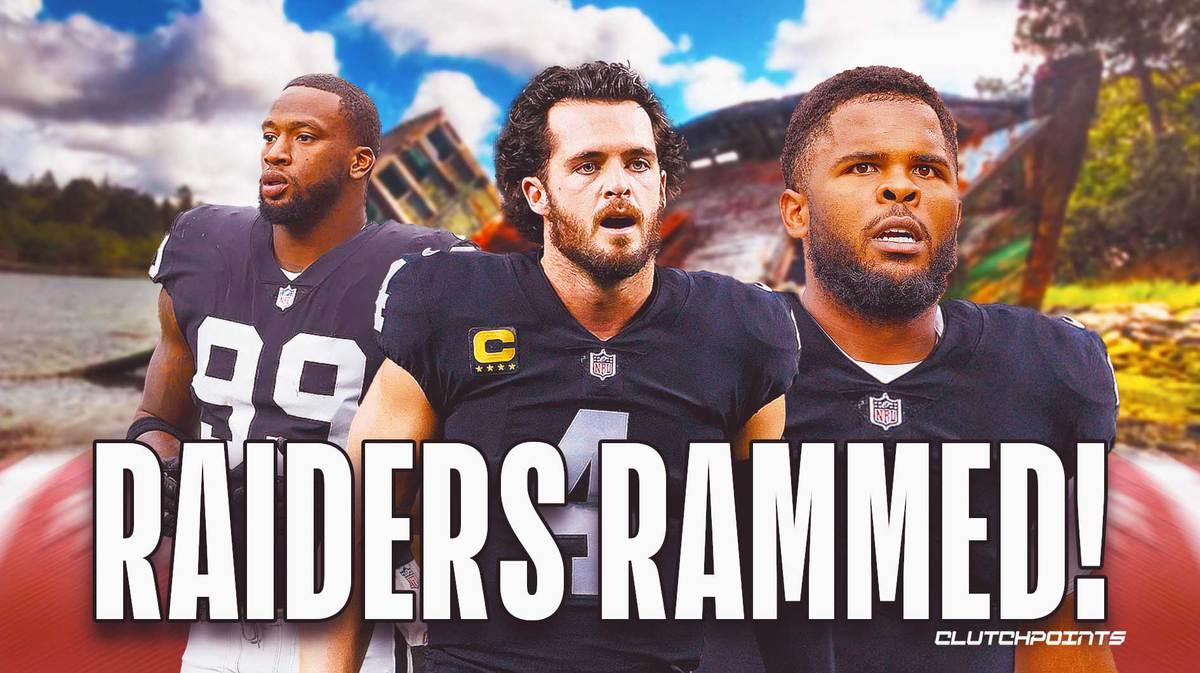 The Las Vegas Raiders saw their three-game winning streak snapped at the hands of the Los Angeles Rams and their newly-acquired quarterback Baker Mayfield, 17-16, on the road in Week 14 of the 2022 NFL season. The Raiders held a double-digit lead in the game before the Rams’ endgame rally. The Raiders are now 5-8, which puts them in third place in the AFC West. Here we’ll discuss the four Raiders most to blame for their disappointing Week 14 loss vs. the Rams.

This season, the Raiders have suffered numerous terrible defeats, including defeats to the Cardinals and Colts. However, this one against the Rams stings quite differently. With a 16-3 advantage late in the fourth quarter against a quarterback who just flew in on Tuesday, the Raiders should have had complete control of the contest. The Raiders’ penalties, though, gave the Rams numerous first downs. These became the game’s main difference-makers. We’ll delve deeper into this later.

Looking ahead to Week 15, the Raiders will play the New England Patriots in a game that they absolutely must win. Then, on Christmas Eve, they will play the Steelers in Pittsburgh. No matter what happens, though, the Raiders’ season is almost over with this team currently toting eight losses.

For now, let us look at the four Raiders most to blame for their Week 14 loss vs. the Rams.

Las Vegas Defensive Coordinator Patrick Graham has orchestrated a pretty strong defense for the Raiders. However, in this game, it was very uneven. Given that new Rams QB Baker Mayfield had hardly grasped the playbook, facing him should have been a simple task. It was, therefore, astounding and totally insane to allow him to drive 98 yards in the fourth period in less than a minute.

The defensive front put forth a valiant effort, though. They recorded four sacks, five tackles for loss, and six quarterback hits. Still, all these were for naught as the Raiders failed to close the deal on the Rams.

Las Vegas had major miscues as well. For example, cornerback Sam Webb has adequately stepped in for a secondary that is in need of solutions and is dealing with injury issues. However, he allowed the game-winning score and didn’t even see it coming.

Even though the Raiders had 235 more yards than the Rams did in the first half, their lead was only 13-3. Wide receiver DJ Turner also had a drop and that kind of summed up the offense’s day. Recall that Las Vegas had advanced to the 8-yard line and had been moved back to the 13. Afterward, Turner dropped a pass from quarterback Derek Carr on a wide receiver screen.

Turner didn’t even give himself or the Raiders a chance in that sequence. That added to the team’s slump even though it was uncertain whether he would have obtained a first down. He finished with 0 yards on the day.

As a team, the Raiders’ receiver corps also didn’t do too well. They totaled 93 fewer air yards than their Rams counterparts, with Davante Adams’ 71 leading the way.

In this heartbreaking loss to the Rams, Carr completed 11-of-20 passes for 137 yards with no touchdowns and two interceptions. In addition, he gained 11 yards on four rushes. He did, however, have a career-low passer rating of 36.9.

The Raiders’ air attack had a difficult night, as evidenced by Carr’s underwhelming stat line. The seasoned quarterback had his lowest yardage total since Week 8 against the Saints. Carr also completed just one touchdown pass in a game for the first time since recording 11 TDs from Weeks 9 through 13. His two interceptions brought his three-game total in that category to five. The second one came on a last-ditch throw. However, his pick right before halftime lost the Raiders was very costly. A Rams error led to a 10-play, 73-yard drive that was ruined by Carr’s interception.

It was just a terrible performance from Carr. For a crucial Week 15 home game against the Patriots, Carr will have more time to reconnect with his receiver corps. He may even see both Hunter Renfrow and Darren Waller make a comeback from injured reserve.

The Raiders committed numerous penalties throughout the game, particularly on the Rams’ final scoring drive. As we already said, that ultimately changed the result.

In the fourth quarter, the Raiders were up 16-3 and had just made the Rams punt. Defensive end Clelin Ferrell, however, was in the wrong spot for the punt. That penalty gave the Rams a first down. CB Tyler Hall was also flagged during the play, but the penalty request was turned down.

And then we saw Las Vegas have two crucial penalties on consecutive plays after Raiders punter AJ Cole made the ball bounce along the sidelines, down at the 2-yard line.

The first was when Amik Robertson received a penalty for pass interference just as safety Duron Harmon recorded an interception. Raiders defensive ends Maxx Crosby and Chandler Jones then teamed for a sack on the next play. Afterward, however, OT Jerry Tillery knocked the ball out of Mayfield’s hands as the defense was celebrating. That foolish action led to another penalty and a first down for the Rams.

In fact, five of the Rams’ 20 first downs came through penalties. In addition, the Raiders accrued 89 yards in penalties during the second half on five of their six total penalties.

The Raiders should have had this in the bag, but their penalties kept the door ajar for the Rams’ rally.