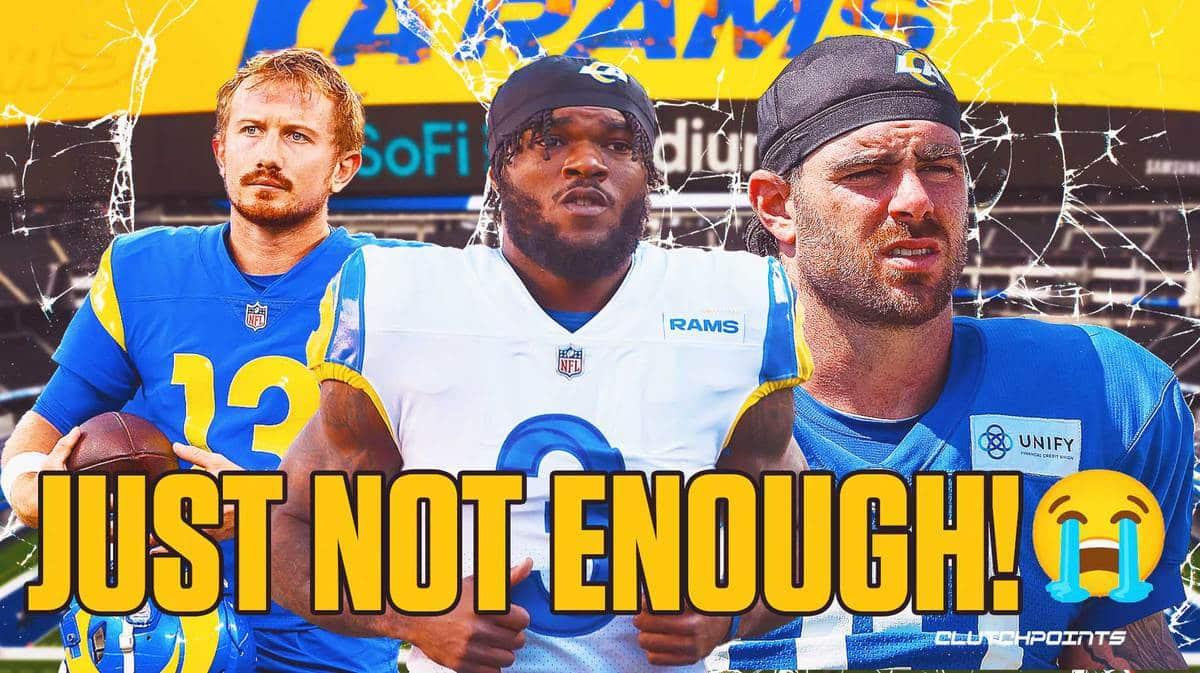 The Los Angeles Rams absorbed their sixth defeat in a row after they lost to the Seattle Seahawks, 27-23, at home in Week 13 of the 2022 NFL season. The Rams’ struggles continued here as they once again played without Cooper Kupp and Matthew Stafford. The defending champions are now 3-9, bringing up the rear in the NFC West. Here we’ll discuss the four Rams most to blame for their heartbreaking Week 13 loss vs. the Seahawks.

It’s really a lost season for the defending Super Bowl champions. It’s as if they get into a deeper hole with each passing week. Head coach Sean McVay is also running out of options to address the roster’s problems. Keep in mind that Los Angeles still had a chance to win with the defense needing a stop late in the game.

Having said that, due to several injuries on both sides of the ball, the Rams have been forced to start some guys they never anticipated this season. They’ve done their best to make it work, but any club would struggle to overcome so many injuries that have decimated the champions’ roster this season.

They certainly scraped the barrel again on Sunday against the Seahawks. They were hoping any and all role players could contribute meaningfully. Interestingly enough, starting running back Cam Akers also returned to form after playing much fewer snaps than Kyren Williams a week ago against the Chiefs.

For now, let us look at the four Rams most to blame for their Week 13 loss vs. the Seahawks.

Los Angeles tight end Tyler Higbee caught just two of five targets for 14 yards in their loss to the Seahawks. He also dropped one and stumbled to the ground after another, thankfully not costing the Rams on their final drive. His best contribution, aside from two short gains on the Rams’ last touchdown drive, was retrieving a John Wolford fumble. That allowed Matt Gay to kick a 54-yard field goal to make it a one-point game at the half.

This game gave Higbee a chance to return to prominence after the veteran tight end went scoreless in Week 12 against Kansas City. However, the Rams struggled to get anything going in the air at all.

Higbee’s productivity has just plummeted in 2022. Through 12 games, he is averaging just 37.0 yards per contest and just 8.9 yards per catch. That’s his lowest average since his rookie season. He has also yet to catch a single touchdown this season. Higbee is a tough-as-nails player who always fights through injuries, but he surely hasn’t had a good season.

The Seahawks just picked apart the Rams secondary in this matchup. Rams CB Derion Kendrick, in particular, continues to be targeted by opposing quarterbacks. Seattle QB Geno Smith targeted him frequently and successfully. This included a crucial 17-yard pass down the seam that set up the Seahawks’ game-winning score.

Kendrick also allowed a 40-yard reception to DK Metcalf down the right sideline in the second half. He was just unable to bring his head around to make a play on the ball. Kendrick, in fact, has been the Rams’ most targeted defender, and he has seldom made opposing offenses pay for it. It has not been a very welcoming rookie season for the Georgia alum. Kendrick’s upside is difficult to see right now.

Meanwhile, another Rams CB, David Long Jr., didn’t fare much better. The former Michigan Wolverine appeared disoriented in coverage, especially on Noah Fant’s touchdown in the back of the end zone. He’s also given up his fair share of big-yard plays this season.

Los Angeles backup QB John Wolford’s main issue is a lack of arm strength. This was very evident on Sunday against Seattle. He left too many throws short of his receivers. This included the Rams’ last play of the game when he seemed to underthrow his target by 25 yards. We still don’t know which receiver he was targeting in that sequence.

Wolford finished with no touchdowns and two interceptions while completing 14-of-26 passes for 178 yards. He had a passer rating of just 43.4. He did make some impressive throws, such as a deep out to Van Jefferson after the Seahawks went offside. However, he also followed that up with an ugly pick.

With Wolford under center, the Rams’ passing game was just stale. Recall that no Los Angeles receiver topped four catches or 48 yards on Sunday. It also didn’t help that both Kupp and Allen Robinson were out.

Rams head coach Sean McVay didn’t really make a lot of play-calling mistakes in this game. However, his management of the roster throughout the season kind of helped make this outcome inevitable. He even admitted he was wrong to keep wideout Tutu Atwell on the sideline after seeing how he performed the last two weeks, especially in Week 11 when he caught a 62-yard touchdown pass. McVay admitted postgame that he should have maximized Atwell’s talent and skill-set help sooner in the season.

In addition to that, keep in mind that since his debut in 2017, McVay has never picked a quarterback in the NFL Draft. Wolford has been in the building for four years, and Bryce Perkins has been in the QB room for three. There is just no reason for terrible backup quarterback play, and yet that’s what we saw. There’s no explanation for being unprepared, and again, that’s what we saw. Maybe drafting a new QB next year should be at the top of the draft to-do list.