The Chicago Blackhawks are evidently heading into a rebuild, which has raised questions about the future of their two franchise stars, Patrick Kane and Jonathan Toews. But, in Kane’s eyes, he’s not even thinking about any potential trade this offseason.

“Patrick Kane said that while “We all know the situation and what can happen,” he really hasn’t had any discussions about the future, not even with his agent or his family. Said he’s focused on the season, hoping the Blackhawks can “prove people wrong.”

Patrick Kane said that while "We all know the situation and what can happen," he really hasn't had any discussions about the future, not even with his agent or his family. Said he's focused on the season, hoping the Blackhawks can "prove people wrong."

That’s good news for the Blackhawks. Both Kane and Toews are heading into the final season of their eight-year contracts before becoming unrestricted free agents. GM Kyle Davidson also said on Wednesday that Chicago “isn’t anywhere near” trading either Kane or Toews:

#Blackhawks GM Kyle Davidson said “there haven’t been any conversations” with other teams about trading Patrick Kane and Jonathan Toews: “We’re not anywhere near that point.”

Patrick Kane is still putting up godly numbers at 33 years old. He had 92 points in 78 games in 2021-22, scoring 26 goals. Toews’ situation is slightly different because he already voiced in the summer that he’s not interested in being part of a “five-year plus” rebuild. Clearly, Kane doesn’t have the same thinking, seeing the upcoming season as a challenge to prove people wrong.

The Blackhawks moved three key pieces in recent months in order to gain more draft capital. Brandon Hagel was shipped off to the Tampa Bay Lightning, Alex DeBrincat went to the Ottawa Senators, and Kirby Dach is now with the Montreal Canadiens.

Davidson hinted at the hope that Patrick Kane and Jonathan Toews would stay put through the rebuild after the DeBrincat trade. Via TSN:

“Yeah, I think there’s value in having guys like that that can help mold and set the bar and set the example for younger players coming in,” Davidson said. “But that’s a two-way street and they have to want to be a part of that. But you know what, to this point we haven’t heard otherwise. Again, we’re going to be very open with them, very transparent.”

It’ll be interesting to see if the two Blackhawks legends remain in the Windy City. 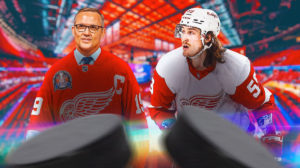