Blake Griffin Free Agency: How can the Clippers keep him?

Once reports surfaced that Blake Griffin and Chris Paul would both test free agency via their player options, it seemed as though the Clippers would have to choose between their two favorite sons. Los Angeles couldn’t possibly make two successful pitches for two of the marquee free agents on the market. Not to mention, the Clippers’ cap issues and history of recent postseason failures made it unclear if Griffin and Paul would stay as a package deal.

Despite rumors that Paul would take meetings with the San Antonio Spurs, Denver Nuggets and other teams, the Point God made his decision before the opening of free agency. Paul forced the Clippers hand by informing them that he planned to sign with the Rockets.

According to the Los Angeles Times, the Clippers were not surprised by the decision. Paul made the decision because he grew frustrated by Doc Rivers’ loyalty to his son Austin Rivers and CP3 had gotten over playing with Griffin.

Plus, the Clippers were not sold on giving Paul the full five-year, $205 million super max that Paul helped negotiate for the players as the NBPA President. Then again, it is always easier to say you were gonna break up with your ex after you’ve already been dumped.

Notice, Paul did not shout out any members of the Clippers organization in his final farewell to fans via social media? Clearly, Paul’s was ready to move on.

Thus, L.A. decided to salvage Paul’s departure by getting Lou Williams, Patrick Beverly, Sam Dekker, some prospects and a first round pick instead of the nothing they would’ve received if Paul signed with the Rockets in Free Agency. Now, Paul can get that fat extension with the Rockets, which could allow him to make $46 million for the final season of the contract. Alternatively, Paul could keep his one-year deal and maintain flexibility for Free Agency next year if the James Harden experiment fails.

Nonetheless, the Clippers don’t have to decide between Griffin and Paul. That decision was made by Paul’s departure and the Clippers must now keep Griffin. Otherwise, the franchise’s decision to rebuild will be made by Blake’s departure too. 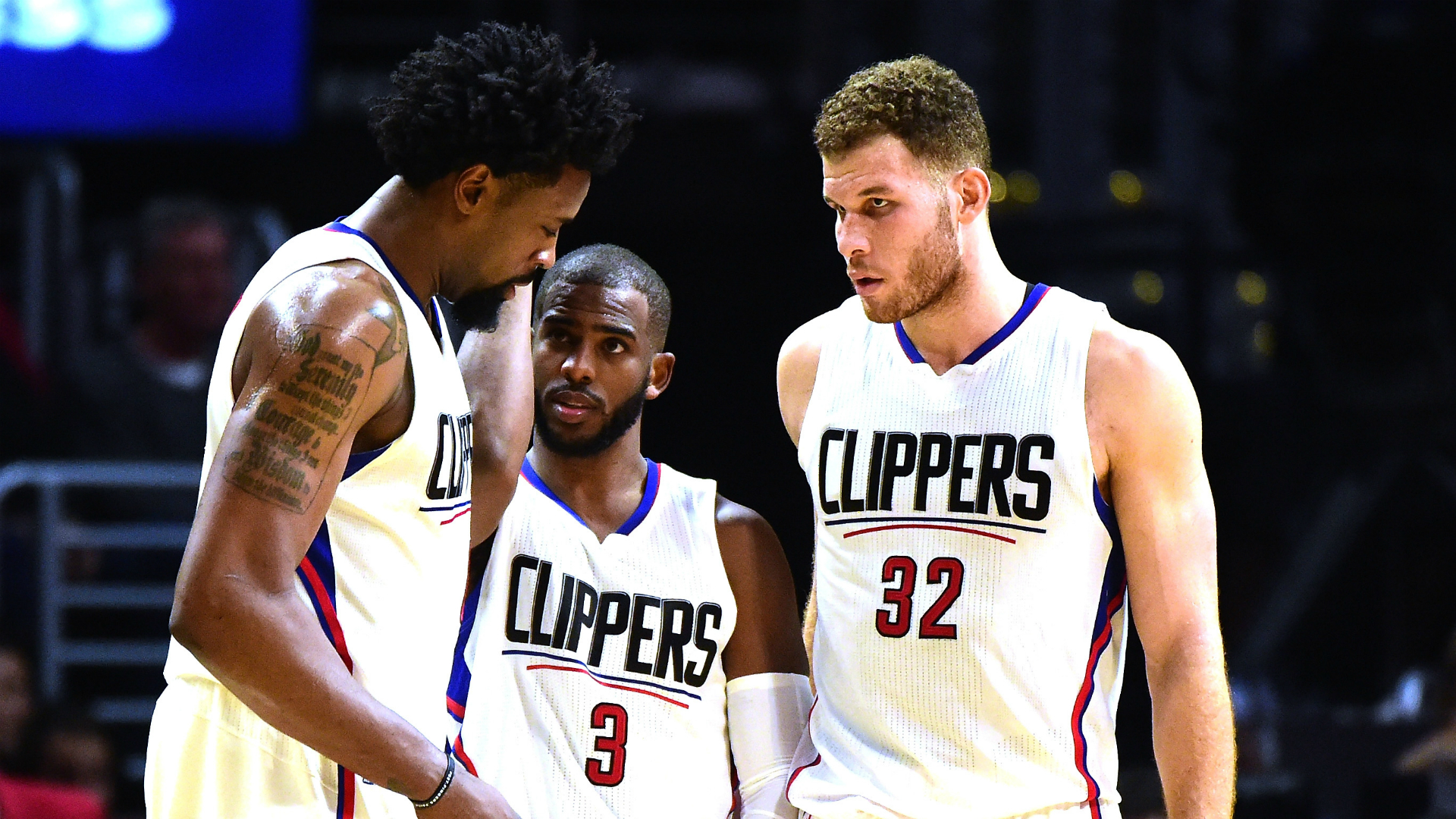 Either way, the Clippers do not have time to morn the loss of Paul. They have got to put together a pitch to keep Griffin.

How can the Clippers keep Griffin in the post-CP3 era?

The Clippers now believe this clear the way for team to sign Blake Griffin, per source

Keeping Blake is not easy but some reports indicate that Paul’s departure won’t make it harder to retain Griffin. L.A. will have to keep the marquee free agent from signing with the Boston Celtics, Oklahoma City Thunder, and San Antonio Spurs, which are some of the teams with rumored interest in Griffin per Hoops Hype’s rumors. To complicate matters worse, there are conflicting ESPN reports that said Blake Griffin’s toe might not be healed until to December.

Clippers can offer the most money

Los Angeles must begin their pitch to Griffin by talking dollars. The Clippers can offer Blake Griffin more money than any other team. Griffin can sign a massive five-year, $175 million contract while no other team can offer him more than four years and $130 million, per the Los Angeles Times.

Given Blake’s injury history, it is hard to imagine that he passes on an additional $45 million guaranteed by the Clippers. The 28-year-old has ended the last two postseasons with a toe and quad injury, respectively. Griffin missed 21 games last season and the five-time NBA All-Star has only played more than 80 regular season games three times in his career. That does not include the knee injury that cost him his entire first season.

Ultimately, the Clippers must offer Griffin a max deal to keep him. Griffin’s career averages of 21.5 rebounds, 9.4 rebounds and 4.1 assists per game show that the 2009 No. 1 pick is worth the huge commitment.

Re-tool the team around Griffin

Griffin averaged 27.5 points on 55.4 percent shooting, 8.2 rebounds and 4.4 assists a game while Paul was out with an injury in the 2013-14 season. According to The Ringer, this is Griffin’s only tenure as the Clippers’ primary option since the team acquired Chris Paul after Blake’s rookie season.

Otherwise, Griffin averaged 24.1 points, 13.1 rebounds, and 7.4 assists per game against the 2015 Spurs in the playoffs. This was the last time Griffin was healthy in the postseason. Hence, Griffin has shown the promise to be the Clippers franchise player sans-Chris Paul. 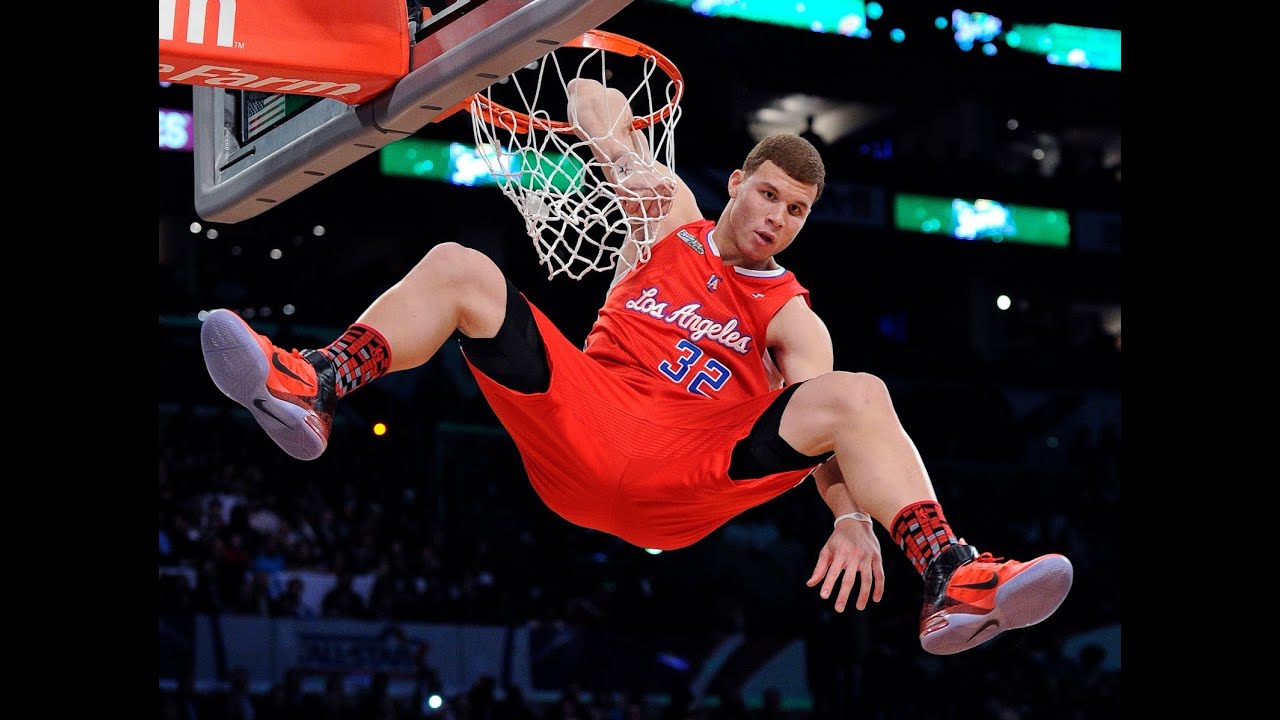 Hopefully, the post-CP3 Clipps involve Griffin running the offense more. The same Ringer article points out that the Clippers mostly used Griffin in the post, where he is only an average player. However, Griffin is one of the best 6-foot-9 passers in history. He is one of 13 players to ever have a season with an assist rate higher than 25 percent.

Regardless, L.A. let Paul control the tempo of the offense. Griffin was stuck trying to develop as a shooter, which is far from his strength. Blake also finished a ton of fast breaks, but Griffin can run them too. The Ringer also cites James Harden and Giannis Antetokounmpo as non-traditional point guards who have helped their teams thrive thanks to their distributing abilities. Griffin could be the next one.

THE LOB, THE JAM🔨🔨🔨 pic.twitter.com/mkkyANBu8F

Therefore,  L.A. must show commitment to building around Griffin as the focal point. This means letting him run the offense in a more uptempo-styled offense. The Clippers employee combo guards like Austin Rivers, Jamal Crawford and Lou Williams who should thrive as scorers in the open floor.

Los Angeles must sell Griffin on the hope that the team will improve without Paul. They must show Griffin that they are committed to trying something new, which includes him as the facilitator.

Sometimes, the grass isn’t always greener with another team. Russell Westbrook established this precedent by staying with the Oklahoma City Thunder after Kevin Durant left via free agency last year. Westbrook ended up winning the MVP only a season after re-signing with the Thunder.

The truth is, this is the only franchise Griffin has ever known. He helped the organization feel hope after they were the laughingstock of the entire league for years. Griffin witnessed this team in the Donald Sterling era, and he helped usher the franchise into the Steve Ballmer regime.

Under Ballmer, the Clippers are finally catching up in terms of facilities, technology, and training staff. They can offer Griffin a chance to continue building this winning culture that includes Jerry West as a consultant.

From the desk of Steve Ballmer: Clippers email to Season Ticket Holders on the new arena plans in Inglewood. pic.twitter.com/BzCHbjKt1y

Additionally, the Clippers will build a state of the art arena in Inglewood within the next decade. Griffin can help Ballmer keep this franchise moving forward until that Clipper Mecca is finally built. At this rate, Griffin can easily become the franchise’s greatest player. 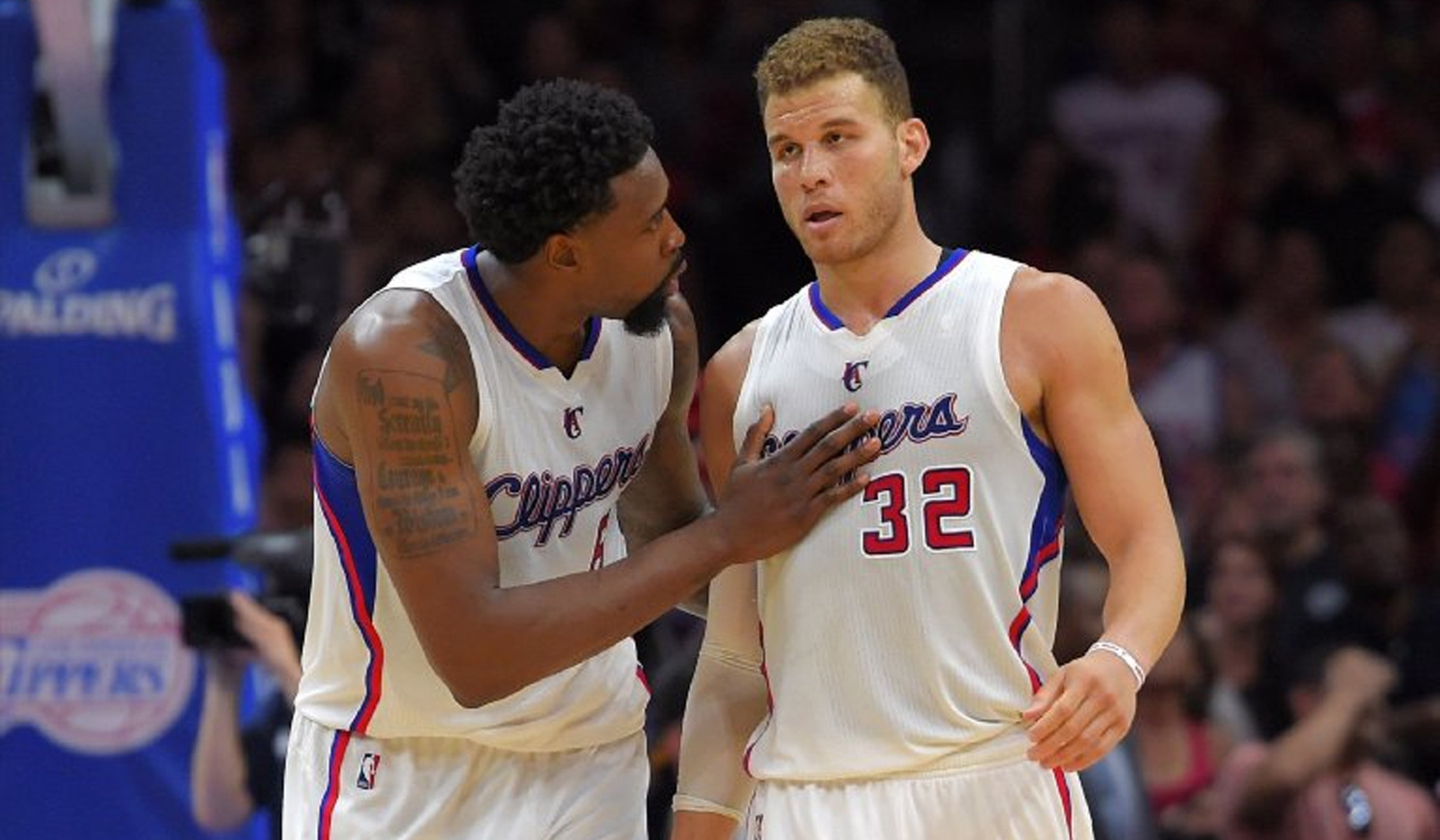 Not to mention, the Clippers can offer Griffin a chance to keep playing with DeAndre Jordan. Jordan is playing the best basketball of his career and he is off his first Olympic Gold Medal and NBA All-Star game. The lengthy and athletic center compliments Griffin on both sides of the ball. He can catch lobs from Griffin while also covering up some of Blake’s defensive liabilities. Not many other teams can offer Blake an opportunity to play with a center like Jordan.

Further, it appeared like Griffin and Jordan genuinely liked each other. Remember when Griffin and the Clippers convinced Jordan to reverse his free agency decision to join the Mavs? Jordan has to have some say in the Clippers’ pitch for Blake. Both are the Clippers’ home-grown talent and modern NBA big men.

The City of Los Angeles

Once upon a time, Griffin was one of the most well-liked players in the league. It appeared he was jumping over Kia’s during every TV commercial break. Then that entire incident with Griffin punching a trainer changed Griffin’s brand.

Griffin’s brand could improve if he is the best player in the Los Angeles market, again. With the Paul gone and the Lakers still developing, this is a realistic sell for Griffin re-signing with the Clippers. Los Angeles is the second biggest market in the nation, and there are a ton of endorsement opportunities for Griffin as the lone wolf.

It is well documented that Griffin is into the entertainment business. He has done standup comedy and hilarious commercials before. Griffin also invested into shows and films. If Blake is serious about Hollywood after Basketball, there is no better place for him than the City of Angels.

More importantly, Griffin likes the lifestyle here. The Clippers do not need to sell Griffin on the city as he has lived here long enough to know the pros and cons of L.A. 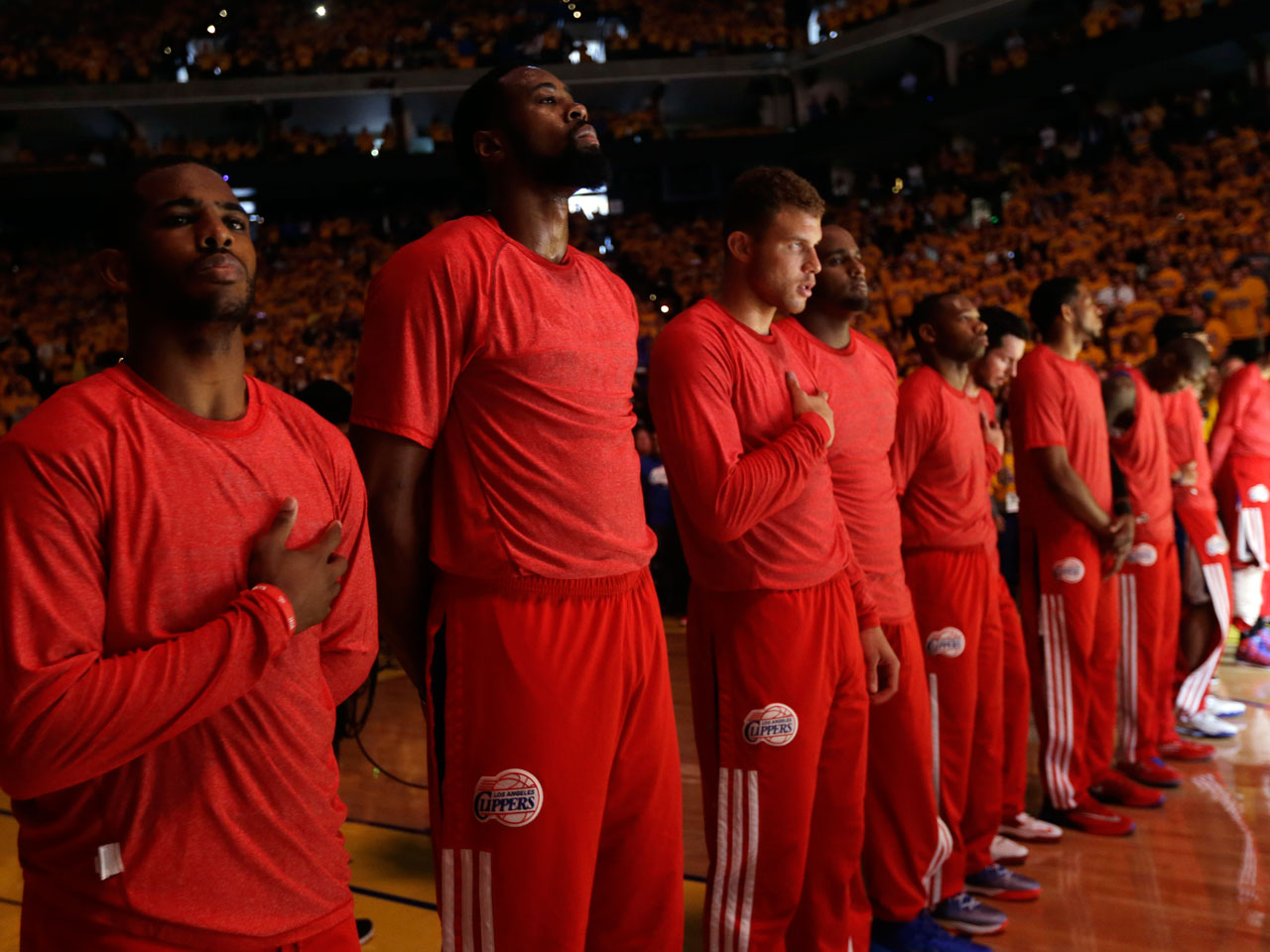 Regardless, the Clippers may find it hard to re-sign Blake Griffin in free agency. They can offer him a ton of cash, their offense, comfort and a great city but can they offer him the best chance to win?

Boston might offer him the best opportunity to win since they are off an appearance in the Eastern Conference Finals. San Antonio might sell him on joining forces with Kawhi Leonard while the Thunder might sell him on teaming up with Russell Westbrook. Then again, both of those teams would need to move some cap to sign Griffin. Plus, the Nuggets and Heat are close to being the young playoff contending teams and they are considered by most free agents.

Added, does Blake believe in Doc Rivers as president and head coach? Griffin has played under Rivers for most of his career, so has he grown sour on Rivers like Paul did? Maybe, Griffin just wants to see what a new organization, coach or supporting cast feels like? Does Griffin even believe in Ballmer’s vision?

Blake Griffin will face a tough decision when free agency opens July 1. However, the Clippers can put together a competitive pitch to keep the superstar forward, even without Chris Paul on the roster.