Denver Broncos quarterback Russell Wilson took a loss in his team debut on Monday. On Wednesday, it was his offensive line that took a hit.

The Broncos will be without offensive guard Quinn Meinerz for at least four weeks, according to Broncos reporter Mike Klis. Meinerz is dealing with a hamstring issue.

The Broncos offensive guard favored his hamstring during the team’s field goal attempt on their opening drive. He played another two drives before being replaced by Graham Glasgow.

The Broncos drafted Meinerz in the third round of the 2021 NFL Draft. The Wisconsin-Whitewater product started 15 of his team’s 17 games last season.

Glasgow figures to replace Meinerz in the starting lineup. Also a former third-round pick, Glasgow broke into the NFL with the Detroit Lions. He started in 62 games in the Motor City before signing with the Broncos in 2020.

The Broncos injury report does not stop with Meinerz, however. Prized free agent acquisition Randy Gregory headlines the names dealing with an issue. Gregory is dealing with a shoulder and knee injury. Safety Justin Simmons seems likely to head to the injured list himself. He is set to miss time with a thigh injury.

Meinerz could also find his way on the injured list, though that is not official at this time. If that happens, the Broncos offensive lineman wouldn’t be eligible to return until Week 6.

While the injuries are concerning, Denver has a bit of a light stretch of games. They take on the Houston Texans and San Francisco 49ers these next two weeks. Those games are following by contests against the Las Vegas Raiders and Indianapolis Colts. 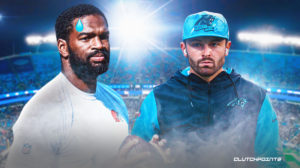