Kris Dunn sees himself as the next Tony Allen

Kris Dunn has long envisioned himself as a quality defender, but it hasn’t been until this season that his defensive presence has been thoroughly felt. The Chicago Bulls guard has even gone as far as comparing himself to former All-NBA defender Tony Allen, who was known for his menacing disrupting ability on the defensive end,

Dunn, who was in the midst of trade rumors to start the 2019-20 season, has carved up 32 starts in 51 appearances, soon becoming one of Bulls coach Jim Boylen’s main defensive linchpins. His 1.98 steals per game rank second in the league only to Ben Simmons (2.13), but his per-36 minutes numbers clearly show just how dominant a defender he can be.

“I feel like Tony Allen, he just fits what I do,” Dunn told Michael Pina of SB Nation. “He’ll pounce on you. He was strong, physical. I think he could guard 1 through 3, even fours. I feel like I can guard some fours sometimes. I feel like that’s a good comparison because he’s got that dog, he’s got that bloodhound in him.”

At 6-foot-3 and 205 pounds, Dunn has an Allen-like frame with an even wider wingspan and plenty of untapped potential yet to hit. His defensive caginess has even gotten Boylen to praise his tenacity on that side of the court. 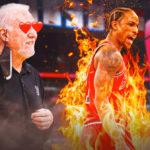 “He’s an all-defensive defender if I’ve ever seen one, and I’ve seen a few of them,” Boylen said right before Dunn suffered a knee injury that could likely end his season. “Paul George, Kawhi Leonard. He’s an All-Defensive guy.”

That’s some tall company Boylen has put him next to, and his comparison to Allen, who made a living with his bulldog-style of defense for 14 years, seems more than fair, even as Dunn is in his fourth year in the league.