The Dallas Cowboys have a problem with their wide receiver depth, but team owner Jerry Jones is not one bit concerned about it. Instead, he expressed his confidence that the weapons the team has are enough to help them contend.

With James Washington sustaining an injury recently and Michael Gallup still recovering from his ACL tear, CeeDee Lamb remains the only wide receiver on the roster who has caught a pass from Dak Prescott. With that said, there have been calls for the team to sign a veteran wideout to fill their need for depth and experience at the position.

Interestingly, Jones doesn’t see the need to, noting that he likes what he has seen so far from the team.

“I feel just like I felt the other day. We saw our wide receivers do some good things out here today. I like (KaVontae) Turpin,” Jones said, per Jon Machota of The Athletic.

For what it’s worth, it’s not only Jerry Jones who is not concerned about the wide receiver situation. Cowboys QB Dak Prescott himself doesn’t see it as a problem, but rather an opportunity for the other players to step up.

“You’re never going to catch me looking at anything in my life as a step back. You’ve got an opportunity to move forward, you’ve got an opportunity to grow. If you don’t do that, you’re in trouble and you’ve already lost to begin with,” Prescott said. “I just know, the young guys that we’ve got, the guys that we already have are going to step in and take on bigger roles. I continue to say exciting, but that’s what it is. And the reason is, is because I feel like a lot of you — and people don’t know necessarily — what these guys are, what these guys can do.”

It is certainly great to see that both Jones and Prescott have the utmost confidence on the the Cowboys they have, though it’s easy to see where the worries of fans are coming from. After the departures of Amari Cooper, Cedrick Wilson and Malik Turner, the team has certainly taken a blow in that department.

Hopefully, though, the Cowboys’ receiving corps erases all those worries and prove Jones and Prescott right. 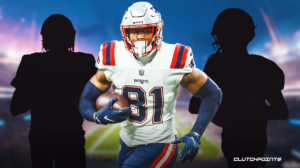