The Dallas Cowboys recently received some tough news when it was announced that defensive star Micah Parsons and offensive lineman Tyron Smith were placed on the reserve/COVID list, among others. Parsons, who was seated courtside without a mask at the Dallas Mavericks-Denver Nuggets game at American Airlines arena, per Clarence Hill of the Fort Worth Star Telegram, technically didn’t violate the NFL protocols, being a vaccinated player. However, Cooper, who is unvaccinated, could face punishment from the NFL. Here’s why.

On Wednesday night, Cowboys receivers CeeDee Lamb and Amari Cooper were unmasked as they sat courtside at the Mavericks game against the Golden State Warriors.

According to the NFL’s 2021 regular-season protocols, “A player who is not fully vaccinated is prohibited from attending a professional sporting event unless he is seated in a separated seating section, such as a suite or owner’s box, is wearing PPE, and there are no more than 10 people in that separate seating section.”

Cowboys wide receiver Amari Cooper did exactly what teammate Micah Parsons did, attending an NBA game while not wearing a mask. The NFL strongly recommends that vaccinated players, like Parsons and CeeDee Lamb, wear a mask.

However, the league requires unvaccinated players like Cooper to either not attend an event or wear a mask and be in separate seating/sit where there are no more than 10 people.

The Cowboys star wideout, who missed two games after testing positive for COVID-19 in November, clearly didn’t adhere to those rules. The NFL can fine violators of those protocols over $14,000, with an NFL spokesman reportedly telling Hill that Cooper could be subject to a fine.

It’s not yet clear what the NFL will do, though what’s clear is that the Cowboys organization probably isn’t going to be happy with Amari Cooper, especially given their current COVID situation. 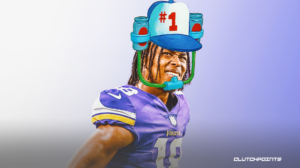