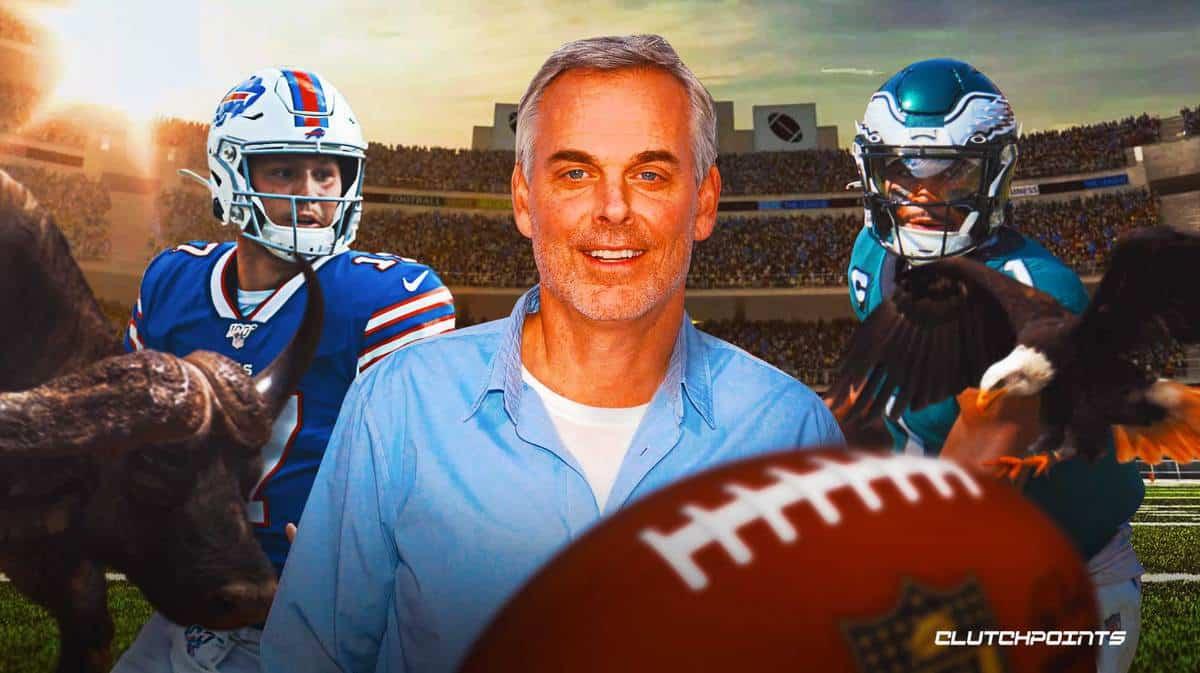 Colin Cowherd is notoriously not the biggest fan of the City of Brotherly Love and their beloved Philadelphia Eagles. He gave the city a tough time for their light pole-climbing, horse-punching reactions to winning the Super Bowl, trashed the city’s sports culture, and spoke positively about the successes of Philadelphia-based athletes in spite of where they play, instead of because of it.

So naturally, when Cowherd has something nice to say, fans are at least going to raise an eyebrow and listen in to see what the FS1 host has to say, if for no other reason than sheer morbid curiosity.

Fortunately, on this particular occasion, the West Coast-based commentator may have swung too far in the opposite direction and placed one heck of a comparison on the shoulders of third-year quarterback and reigning “Lord Swaggerton 9000,” Jalen Hurts.

“So I’m watching Philadelphia and it’s very funny,” Cowherd said on his FS1 show. “Years ago, I’m not going to mention the kid’s name, but there was a quarterback, he was a really talented high school quarterback in Southern California about seven, eight years ago. Big attitude, dad had an attitude, kid had an attitude, and I knew a coach in college football who said ‘the kid’s got tons of talent but his dad’s ruined him, won’t make it, he’s got all of the answers and he’s 17 years old.’ The kid’s done nothing and it’s too bad, and so, like so much of working in the NFL, you see it with Lamar Jackson, you see it with Josh Allen, you see it with Jalen Hurts, it’s just attitude.”

“At Oklahoma, Baker was going to be a star. And Kyler was going to be a star. And Jalen Hurts came in after being benched at Alabama, he went to Oklahoma, and everyone kind of look at him like ‘yeah, he’s a college quarterback, he’s not big enough, he’s not accurate enough. He’s a college quarterback, he got benched at Alabama ’ and (now) he’s the star. Kyler, moody, doesn’t want to run. Baker? Good luck with that. And Jalen Hurts is the rock star. The prospect, the kid that’s basically, as they call it, is working in the dark, head down.”

Now, if that was where the clip ended, it would be a nice tribute to the ascending quarterback, but Cowherd wasn’t done. No, he decided to compare Hurts to one of the most successful young quarterbacks in the NFL and set a bar that totally won’t be thrown back in QB1’s face should he struggle.

Collin Cowherd has high praise for the Philadelphia Eagles QB.

Without further ado, who is Cowherd’s mystery man?

So what turned it all around after the collegiate Cowboy’s run in Wyoming? Well, Cowherd has a theory on that too.

Eagles’ Jalen Hurts, Philly can breathe sigh of relief on AJ Brown for Week 12 vs. Packers

“Josh Allen got good coaching, offensive coaching, Brian Dabell, worked his tail off, worked in the dark, you didn’t see, Cowherd said. “You wake up and see Josh Allen. Now he’s 6-6 and jumping over people, but he went to a small school, go look at Josh Allen’s story, it’s all about people doubted him, people told him he couldn’t do it, it’s the exact same story for Jalen Hurts. It’s the exact same story, their trajectory is the exact same, massive, massive moves. Josh Allen and Hurts, you think that first big leap you’re like ‘okay, that’s it’ and then they make another huge – you can’t tell me that isn’t about chip on the shoulder, hard work, you can’t tell me that isn’t a huge component to this stuff.”

Considering Hurts spent his offseason working on his footwork with a QB guru in California, working out with A.J. Brown, and working Howie Roseman to trade for his long-time friend, it’s clear the OklaBama quarterback is no stranger to putting in the work, and at least in the eyes of Cowherd, that his work has paid off.

“So I think Jalen Hurts, I think he’s a great story,” Cowherd declared. “First impressions are incredibly powerful, Nick Sirianni looked like a goofball at the podium and I wrote him off. I mean, I was like ‘this guy Is terrified, how is he going to talk in front of 55 alpha males? He’s terrible.’ And I wrote off Jalen Hurts, I thought ‘he’s too small, I watched him in college, he’s inaccurate.’ He and Josh Allen are insane, the trajectory is straight up.”

Will Hurts ever be as good as Allen? Only time will tell, but just earning the comparison is a pretty spectacular honor that would have sounded crazy to Eagles fans just one year ago.