The battle between LIV Golf and the PGA Tour is reaching new heights. As many as 11 LIV golfers have decided to take legal action against the PGA Tour in order to oppose their suspensions, which stemmed from their participation on the LIV Golf tour. Phil Mickelson and Bryson DeChambeau are two of the players involved in the recently-filed antitrust lawsuit, according to The Wall Street Journal.

11 LIV golfers — including Phil Mickelson and Bryson DeChambeau — have filed an antitrust lawsuit against the PGA Tour challenging their suspensions. pic.twitter.com/d2mTAnc79S

The PGA Tour made the decision to suspend players who participated on the LIV Golf tour, effectively preventing them from participating in any Tour events so long as they’re affiliated with the Saudi upstart “super league.”

Three players from the antitrust lawsuit have filed for temporary restraining orders in order to enable them to play in the FedEx Cup Playoffs on the PGA Tour. Taylor Gooch, Hudson Swafford, and Matt Jones are all seeking the temporary restraining order in hopes they can play in the FedEx Cup Playoffs, which all three had qualified for prior to their suspensions.

Players suspended from the PGA Tour are ineligible to play in some big upcoming events, including the Ryder Cup and the Presidents Cup. They are also removed from the FedEx Cup rankings.

DeChambeau himself spoke out against the decision from the PGA Tour to suspend LIV’s golfers, and he seemed confident that the restrictions would be lifted before long.

DeChambeau feels confident that the PGA’s suspensions will be overruled, and the antitrust lawsuit is the first steps for the LIV Golfers to regain eligibility in PGA Tour events. 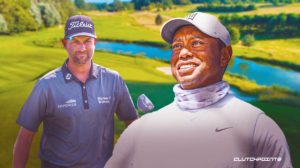