With the series tied at one apiece, the third installment between two playoff-worthy teams in the Toronto Blue Jays and the Minnesota Twins should be an absolute treat for baseball fanatics and bettors alike. It is time to check out our MLB odds series, where our Blue Jays-Twins prediction and pick will be revealed.

After the Blue Jays took care of business rather easily in the series-opening win on Thursday, a pair of critical mistakes down the stretch cost them on Friday. Looking to rebound from the 6-5 defeat in extra innings, Toronto will call upon newly acquired and former Dodgers starter Mitch White. In ten starts with Los Angeles, White went 1-2 with a 3.70 ERA

The miraculous victory for the Twins was just what the doctor ordered. Already stressed with holding off the rest of the teams in the AL Central, another win against a team like Toronto will boost the morale within the clubhouse even more. Tasked with helping his team reach back-to-back wins, righty Dylan Bundy will get a chance to shut down the Blue Jays with his 6-5 record and 5.04 ERA.

Here are the Blue Jays-Twins MLB odds, courtesy of FanDuel.

What seemed like a magical comeback in the making after Toronto tied the contest in the ninth inning thanks to a Raimel Tapia single, it was just too good to be true. Alas, when the game entered the 10th inning, Toronto catcher Danny Jansen made a pair of miscues to guarantee Minnesota with the victory. After throwing the ball away on a dropped third strike, Jansen followed that up by not corralling a play at the plate to give the Twins the lead late. While it was a day to forget for the Blue Jays backstop, Jansen will need to have a quick memory if he remains in the starting lineup and helps direct the pitching staff behind the plate.

One area that Toronto should thrive in this one will be at the dish. In the first two games of the series versus the Twins, Toronto has performed with explosive tendencies with the bats in their hands. With 14 runs total, the ‘Jays could cover with one swing of the bat. Make sure to keep your eyes on Whit Merrifield in an attempt to replicate another multi-hit outing. With only a couple of games as a Blue Jay under his belt, “Two-Hit Whit” could very well live up to his name hitting in the leadoff spot of the order.

Not to mention, but there is certainly buzz surrounding the expected starter on the mound. Like Merrifield, Mitch White’s arrival in Toronto has the opportunity to take the Blue Jays to the next level. In today’s matchup more specifically, White filthy arsenal has the makings to silence a streaky Twins offensive attack.

In order for the Twins to cover the spread against the Blue Jays on Saturday, Minnesota must avoid having a repeat of blowing an early lead only to make things interesting late. In the first four frames of the game, the Twins held a 5-0 commanding lead before Toronto stormed back only two innings later by scoring four runs themselves. Before they knew it, the Twins unwillingness to go for the kill had cost them. Eventually, the game reached a tenth inning where it was anyone’s ballgame. Fortunately for Minnesota, the five-run blown lead didn’t end up doing them in. With some luck, the Twins prevailed. However, another outing where they don’t keep their foot on the gas might not be as pretty.

Certainly, eleven hits is a more than ideal performance from any offense. In fact, each starting position player was able to smack a base hit against the arms of the Blue Jays. Already an above-average hitting squad with the 14th most runs scored and a respectable .417 slugging percentage, the Twins can definitely have a repeat at the plate. Also, don’t expect first-baseman Luis Arraez to go 0-5 again. The 25-year-old will surely have a chance to single-handily cover the spread with his second-best batting average in all of baseball at .321.

Through the first couple of games in this series, we have been spoiled by a pair of entertaining showdowns that surely haven’t lacked runs being scored. However, taking the Blue Jays to win by more than two runs will be a tough ask. 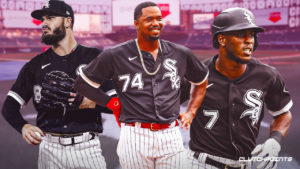 JUST IN: ‘We are a good team’: Eloy Jimenez reveals key for White Sox to turn season around
Related TopicsMinnesota TwinsMLBToronto Blue Jays