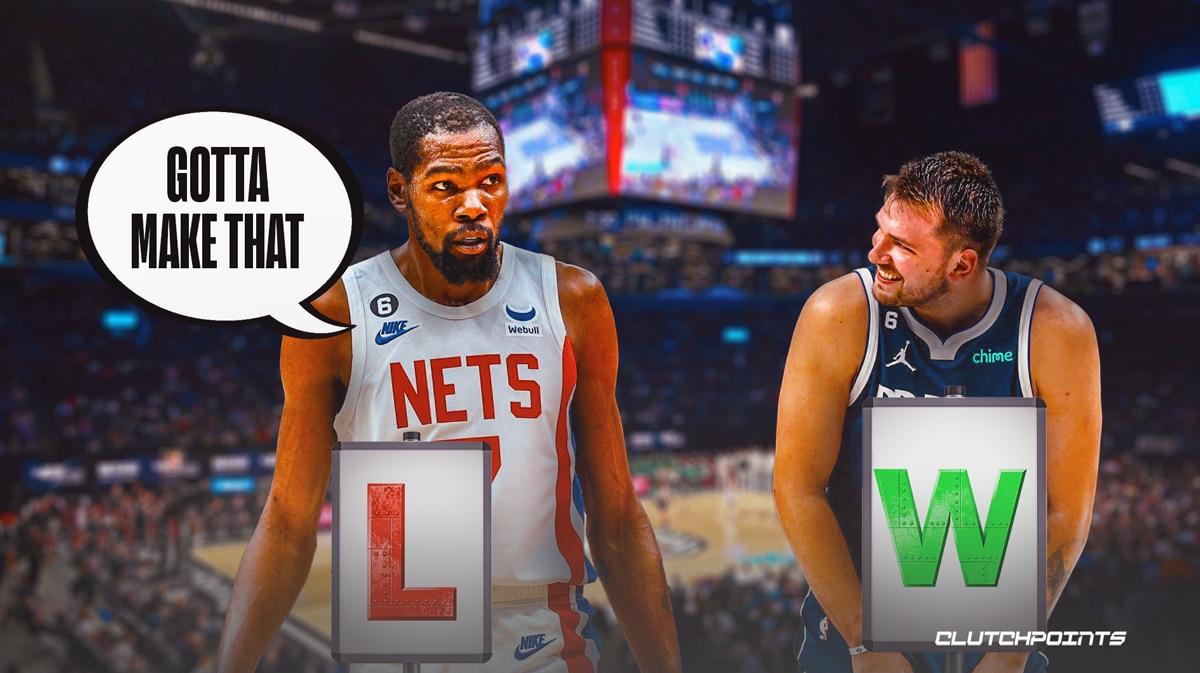 Following a week of unprecedented drama, Kevin Durant and the Brooklyn Nets rode into Dallas Monday on a two-game winning streak. The Nets had a chance to take down one of the West’s top teams and gain more momentum heading into a matchup with their crosstown rival.

The game was a back-and-forth affair that saw Brooklyn storm back from an 11-point deficit with four minutes remaining. Down three with five seconds left, Durant got fouled on a 3-point attempt to tie the game. After making the first, his career-best 62nd straight made free throw, Durant released the second and watched it graze the front rim before ricocheting to the back, bouncing out, and falling to the hardwood.

The former MVP would execute a perfect miss on the third. The ball landed in Royce O’Neale’s hands, who drove into three Mavericks defenders before throwing a wild pass that would be intercepted to secure the 96-94 Dallas win.

“I’ve gotta make that. That’s the game,” Kevin Durant said in disbelief postgame. “F***, man. I felt like I went through my whole routine. Damn, I should have shot it a little stronger.

“It sucks. I tell guys all the time, ‘They’re free,’ and I went up there and missed one. It sucks. Nothing much else I can say about it.”

wow. Kevin Durant’s streak of 62 made free throws in a row comes to end as he misses the second of three free throws at the death for the tie. Mavs win.https://t.co/jfMPdUkYsopic.twitter.com/rwFgCk3Xs8

Kevin Durant finished the game with 26 points on 10-of-20 shooting. Despite the loss, Monday was among the best basketball Brooklyn has played this season. Their defensive activity was a noticeable improvement, holding a Dallas team that ranks second in offensive rating to 32-of-72 shooting (44.4 percent).

The Nets once again had no answer for Luka Doncic, however, as the 23-year-old posted 36 points on 11-of-22 shooting from the field and 5-of-9 shooting from 3-point range. Doncic has now scored 30-plus in all nine of his games this season and leads the league in scoring at 36.0 points per game.

Luka was magical in the @dallasmavs win:

Despite the Slovenian’s brilliance, the Nets led by as much as 14 in the first quarter. They opened the fourth quarter with a one-point lead and extended the cushion to four with just over eight minutes remaining. But a dry spell that saw Brooklyn go scoreless for over four minutes would allow the Mavericks to gain control before the Nets’ late comeback attempt.

Durant got into a trash-talking match with former Net Theo Pinson on Dallas’ bench as the Mavericks made their fourth-quarter run. The 12-time All-Star got a technical foul after running into Josh Green with Dallas in the bonus. The three free throws would push the Mavs’ lead to 10. Despite this, Durant said the play was not a result of frustration.

“I wasn’t pissed off, I was having an amazing time, a great time. I love talking s**t to fans, other teams, coaches,” Kevin Durant said. “And they sense that it’s a healthy thing. It’s not like I’m upset and wanting to fight Theo, or pissed off at him for talking to me. I was having an amazing time. No better place for me to be at this point in my life than where I was.”

Dallas reverted to zone coverage for large portions of the fourth quarter, doubling Durant to force the ball out of his hands. Pinson reportedly told Durant he would have to turn into Magic Johnson passing out of the double teams to give the Nets a shot. The Brooklyn star said he let the Mavs’ bench know they wanted no part of defending him one-on-one.

“Nobody in this league wants to let me go one-on-one, or wants to see me on my spot. So they’re gonna throw three or four people at me, play zone up when I get the ball,” Kevin Durant said. “And I was just telling them, ‘This is how great I am.’ That’s just a simple fact that when you put that much attention on one player when you’re playing a team sport, it shows how great I am. So he understood.”

With Kyrie Irving suspended, Brooklyn’s offense has been a struggle for large stretches of the last two games as teams continue to sell out against Durant. Cam Thomas paced Durant with 19 points on 5-of-13 shooting. The 21-year-old hit a huge triple to cut the deficit to one in the final minute. O’Neale added 15 points on 4-of-8 from 3-land.

Joe Harris and Seth Curry are still re-acclimating following offseason ankle surgeries. Harris posted his best performance of the season, scoring 14 points on 6-of-10 shooting. Despite this, the seventh-year Net has yet to find his accustomed 3-point stroke as he works his way back into shape. Similar to his first two outings, Curry failed to find his rhythm in 13 minutes, going scoreless on 0-of-3 from the field.

Ben Simmons returned after a four-game absence and turned in another underwhelming performance. The first-year Net posted two points, three rebounds and two assists on 1-of-3 shooting in 16 minutes. After dealing with knee soreness and swelling for the last week, Simmons looked healthy Monday, moving well and showing solid lift on his lone dunk. However, the 26-year-old once again looked passive offensively as he makes his way back following a year-long absence.

Brooklyn lost another key contributor Monday with Yuta Watanabe leaving the game in the first quarter with a sprained ankle. The 28-year-old had carved out a productive two-way role in Brooklyn’s rotation, averaging 5.7 points per game on 12-of-22 (54.5 percent) shooting from 3-point range. Watanabe could not put weight on the ankle as he left the floor and was quickly ruled out.

The loss brings the Nets to 4-7 on the year. They will travel home for a matchup with the crosstown rival New York Knicks Wednesday before leaving for a four-game West Coast trip.