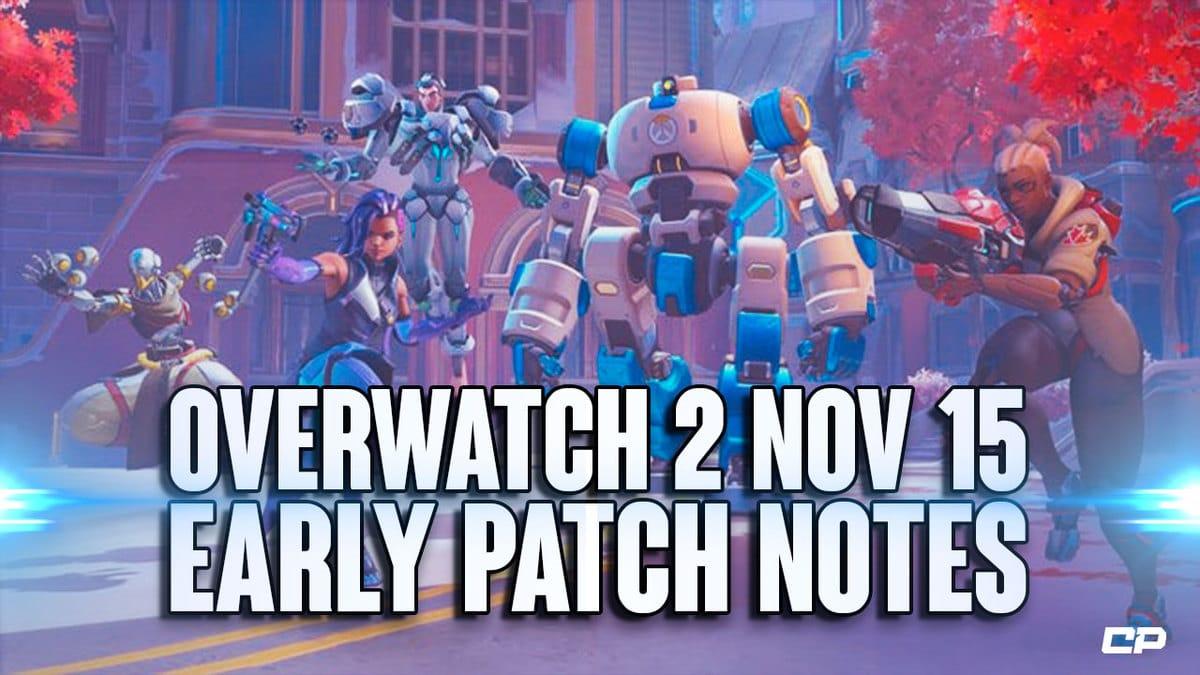 The first Overwatch 2 balance patch will be going live on November 15 on all platforms of gameplay. Here’s everything we know about the mid-season update with an early update on the patch notes. The update will be focusing on multiple nerfs on the biggest winners of the transition to Overwatch 2, after its release. The early patch notes released a total of five heroes that will be receiving nerfs, including the newest addition to the team, Kiriko.

Kiriko was immediately seen in professional play in the Overwatch League Grand Finals due to her kit being amazing as a support. Genji was also hit, instead of Sojourn, being one of the reliable DPS as seen in the Finals.

As for concerning pubs, Zarya will have the biggest nerf, giving her barriers nerfed in duration and cooldown. Sombra will also be hit with the nerf hammer, having her Hack ability last a bit less and her damage multiplier being heavily reduced. The last one will be D.va having her damage output high for a tank to have. Her survivability as well as damage output rivals most of the tanks picked in casual play. On the bright side, Mei will come back along with the patch after her bug on her skill Ice Wall, giving Kiriko an unthinkable reach on her attacks.

We will see these changes live on the mid-patch of Overwatch 2 as we prepare for the arrival of the new hero, Ramattra. Most of the characters hit are seen in pub games so there will definitely be a change of meta coming to us. Here are the Overwatch 2 early patch notes that will happen on November 15:

Sombra
>Hack ability lockout duration reduced from 1.75 to 1.5 seconds
>Hacked enemies are no longer valid targets for hacking for the duration of the effect
>Hacked damage multiplier reduced from 40 to 25%
Dev Comment: “With Sombra’s rework, she gained a lot more damage to help account for the reduced ability lockout duration of Hack. This has proven to be too deadly for a flanker with easy access to the enemy backlines, and we’ve similarly had to address the damage output of heroes like Tracer, Reaper, and now, Genji, in the 5v5 format. She can also no longer channel hack on an already hacked target as feedback indicated the reduced cooldown combined with hacking from stealth proved to be too frustrating for many players. This is essentially a per-target cooldown that enables Hack to keep its current 4 second cooldown for potentially hacking multiple targets.”

Genji
>Maximum ammo reduced from 30 to 24
>Shuriken damage reduced from 29 to 27
Dev Comment: “Genji is a Hero that has greatly benefited from the move to 5v5. Changing to a single Tank and the reduction of crowd control has meant Genji has had less obstacles in his way, however he hasn’t received tuning updates since he wasn’t actively in the meta until launch (something also informed by our general preference to avoid preemptive adjustments when possible). We also saw that, in early beta tests, other flanking Heroes such as Tracer and Reaper were also significantly more effective in OW2. These changes will bring Genji more in line with the other flanking damage heroes.”


Zarya
>Barrier duration reduced from 2.5 to 2 seconds
>Barrier cooldown increased from 10 to 11 seconds
Dev Comment: “Early player sentiment predicted Zarya as one of the weakest solo tanks in 5v5 though her high damage potential and barrier uptime have proven to be extremely effective. For opponents, feedback has indicated this can feel as though Zarya has very limited windows of vulnerability, which feels difficult to deal with when combined with her ramping damage potential. These changes will reduce the barrier uptime, making it slightly more difficult for her to gain energy and will provide enemies with more time to deal damage to her.”

D.va
>Fusion Cannon spread increased from 3.5 to 3.75
>Boosters impact damage reduced from 25 to 15
Dev Comment: “D.va ended up feeling too deadly after the last round of changes given how resilient she can be with the improved Defense Matrix. Both our stats and high-level player feedback regarded her as not effective enough before that compared with other tanks, so this is a partial revert to establish some middle ground there.”

Kiriko
>Swift Step invulnerability duration reduced from 0.4 to 0.25 seconds
Dev Comment: “This invulnerability window is primarily intended to help avoid instantly dying to something unseen after teleporting through walls, but it ended up being a little too long and led to some confusion when shooting at Kiriko”