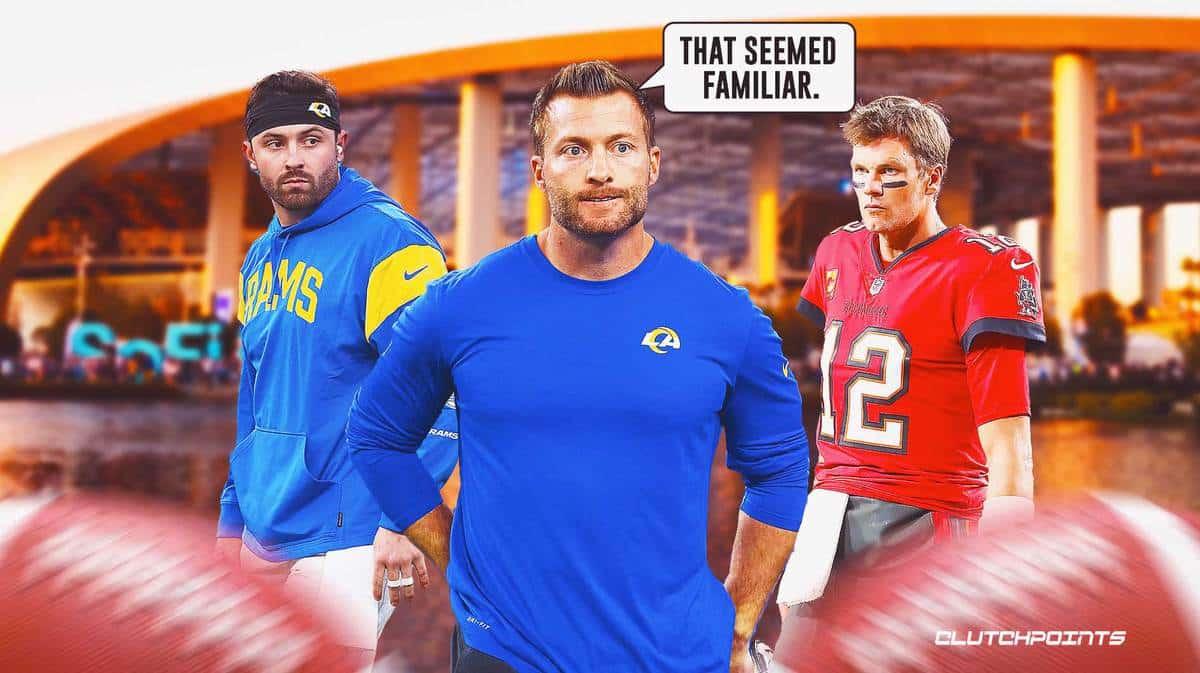 Only five seasons after being drafted first overall, Baker Mayfield has seen his stock dip considerably, culminating in his eventual midseason release from the Carolina Panthers. The Los Angeles Rams took a chance on him nonetheless, given the injury to QB1 Matthew Stafford, and Mayfield delivered in a huge way, pulling off crunch-time heroics out of his hat to lead the Rams to a 17-16 victory over the Las Vegas Raiders.

And head coach Sean McVay had just one thought swirling in his mind the moment he stepped foot in his postgame press conference, especially after the game’s photo finish reminded everyone of Tom Brady’s cold-blooded late-game exploits in the Tampa Bay Buccaneers’ comeback victory over the New Orleans Saints this past Monday.

“Alright guys, just like we drew it up,” McVay said in jest, referencing Brady’s perfect response after the Buccaneers’ come-from-behind win.

Tom Brady on Monday Night: "Just like we drew it up."

There are plenty of parallels between Tom Brady and the Buccaneers’ win with Baker Mayfield and the Rams’ inexplicable victory. For starters, the two games ended with the same final score, 17-16. The Saints also held a 16-3 lead at some point in the fourth much like the Raiders did. This set the stage for Brady and Mayfield’s heroics.

Brady led two touchdown drives – a 10-play, 91-yard scoring drive and an 11-play, 63-yard game-winning drive that left only three seconds on the clock. Meanwhile, Mayfield led 75 and 98-yard touchdown drives to snatch victory from the jaws of defeat.

Perhaps this could prove to be the turning point Baker Mayfield sorely needs in his career. And Sean McVay will definitely give Mayfield plenty of opportunities to cement himself as a starting-quality quarterback with Matthew Stafford expected to miss considerable time due to injury.

“I was really impressed. I don’t know if I would say ‘surprised’ because I’ve always been a fan of the things he was capable of. He certainly exceeded all our expectations, but it was fun watching him go to work tonight,” McVay added.

"Certainly exceeded our expectations. It was a lot of fun watching [Baker] go to work tonight." pic.twitter.com/qN1Q80GkGZ

Baker Mayfield will look to keep it going when the Rams take on the Green Bay Packers in Week 15.