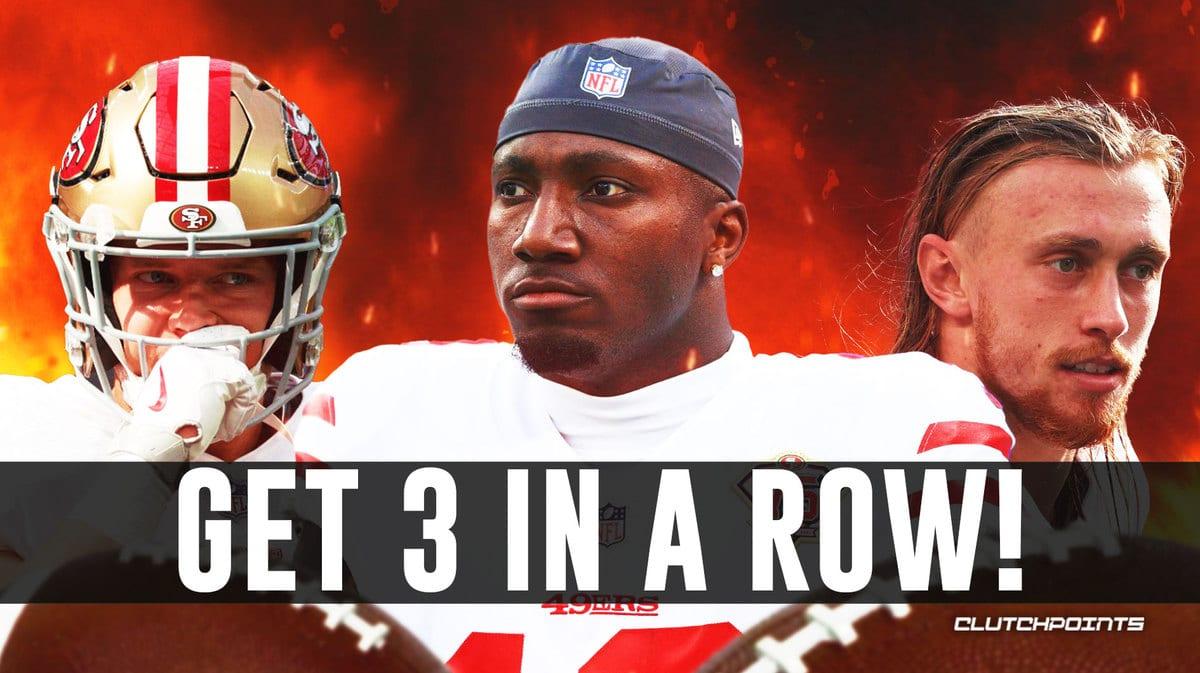 The San Francisco 49ers are coming off a stirring conquest of Los Angeles after back-to-back wins over the Rams and Chargers. They want to make it three wins in a row as they face the Arizona Cardinals at the Estadio Azteca in Week 11 of the 2022 NFL season. A win here in Mexico City can inch the 49ers much closer to first place in the NFC West. Here are our 49ers Week 11 predictions as they take on the Cardinals.

The 49ers just defeated the Chargers 22-16 in Week 10. Star running back Christian McCaffrey scored his third touchdown as a Niner in that contest. It was actually kind of an unusual game for the 49ers. They scored only 22 points and averaged 5.0 yards per play, but it was still a solid enough performance to overcome a weakened Chargers team.

Meanwhile, the Cardinals defeated the Rams on Sunday, 27-17. With quarterback Kyler Murray out, Colt McCoy stepped up and threw for 238 yards and one touchdown. Running back James Conner scored two touchdowns, while safety Budda Baker had a key interception. With Murray still questionable for Week 11, Arizona might be forced to turn to McCoy once more.

With all these in mind, here are our four bold predictions for the 49ers in their Week 11 game against the Cardinals.

Monday Night Football is about to be a fiesta 🇲🇽@ESPNNFL x @49ersESP#SFvsAZpic.twitter.com/EisJ4GiCGp

San Francisco TE George Kittle struggled against the Chargers last week. He caught just one of two targets for 21 yards. It was his lowest season total of the season thus far. Prior to that game, he was coming off back-to-back outings with a touchdown each.

We see Kittle bouncing back this week against the Cardinals. Arizona has not been very good at stopping opposing TEs this season. In fact, they have given up the most targets, catches, yards, and touchdowns to the position, with no other team coming close. This has the potential to be a major blow-up for Kittle so he has a very good chance to not only go over 50 yards but get a touchdown as well.

49ers WR Deebo Samuel struggled in his comeback game last week. He collected just two of six receptions for 24 yards. He gained 27 yards on four runs, but it’s worrying that his numbers have noticeably dropped off after Christian McCaffrey came into the offense.

Much like in Kittle’s case, however, we easily see Samuel rebounding this week against the Cardinals. We expect that this game will feature a lot of passing, which means more chances for Samuel to do some damage. The key is the number of targets he is given. If Samuel continues to have at least six touches and six targets – as he has in each of his previous games with McCaffrey – he should eventually produce decent numbers. Put him down for over 80 all-purpose yards.

2. CMC all day in Mexico City

San Francisco RB Christian McCaffrey has scored three touchdowns in three games so far as a 49er. That includes one passing touchdown. That means that any doubts about his explosive playmaking in a new team should be put to bed.

Deebo Samuel , 49ers get promising injury update for Week 12 vs. Saints after prior concern

Last week, however, he was limited to just 38 yards on the run. Still, he scored and added 39 yards on four receptions. McCaffrey has actually had 54 touches and 14 catches in three games, so he should continue to excel in this scheme.

This week, McCaffrey faces a Cardinals defense that ranks among the worst in terms of limiting opposition running backs. He should do very well here. We see him easily doubling on his previous rushing total and getting some air yards, too. Put him down for another triple-digit game and one touchdown.

1. 49ers defense tides them through

The Niners should be in good shape here. Of course, they will also keep an eye on the health of Arizona QB Kyler Murray. It goes without saying that Murray is a game-changing presence. The 25-year-old is still nursing a hamstring issue, and his prognosis for Monday night is still up in the air. If he is forced to sit out again, the 49ers will have an even more significant advantage.

Murray’s backup, Colt McCoy, did a decent job last Sunday, but he only averaged 9.2 yards per completion. Now, if he plays, he faces a San Francisco defense that ranks 10th in pass defense DVOA. Take note that in four of their previous six games, the 49ers have allowed fewer than 17 points. Defense will tide the 49ers through in this game, and they will succeed in netting their third win in a row.