The Phoenix Suns had a disappointing playoff exit following their NBA Finals run in 2021. It was a surprising loss to the Dallas Mavericks as the Suns finished with the best record in basketball during the regular season.

Phoenix was one of the favorites to win the title entering the season with an incredible roster and coach. The star backcourt of Devin Booker and Chris Paul is elite, and they are the leaders of this group. Having a bounce-back campaign in the upcoming season will start with their play.

Center Deandre Ayton coming back was not expected by many after turmoil with his contract and at the end of the playoffs. The Suns matched the Indiana Pacers contract offer to Ayton, which gives him a four-year $133 million deal. Despite all the rumors of sign-and-trade deals, Ayton will be staying in Phoenix for the long haul.

The Suns have a great core of role players around their three top players with complementary players like Mikal Bridges, Jae Crowder, and others. While they came up short this past season, Phoenix can win the title this season.

With that said, here are three way too early bold predictions for the Suns in the 2022-23 NBA season.

3. Suns make it past the 2nd round

Phoenix should come back with a vengeance next season and thrive. They have a well-rounded roster and should get back to title contention. The Western Conference will be tough to get through as nearly every team is set to be competitive.

However, the coaching advantage of Monty Williams could give them the edge. Williams is one of the best coaches in basketball and is excellent at getting the best out of his players. Williams took home the Coach of the Year award. Great teams often come back from adversity and play at a high level. The Suns should have that type of play this season.

He finished in 4th place this past season in the MVP race behind Nikola Jokic, Joel Embiid, and Giannis Antetokounmpo. Booker can score at all three levels and is the Phoenix’s best player. Chris Paul is one of the league’s best playmakers, which makes Booker an even better player. He should have another phenomenal season and compete for the MVP award.

1. Deandre Ayton has a career year

Ayton’s return was shocking, but with all that settled, he should have the best season of his career. He had a good campaign the past year, averaging 17.2 points and 10.2 rebounds while shooting 63.4 percent from the field.

Ayton has become underrated but is one of the best centers in the league. He is a walking double-double and is a very efficient scorer. The Suns are going to need Ayton to step up more as they try to bring home a championship. He is a dominant force that is hard for other centers to defend. Ayton should be fueled by the fire of all the offseason drama and prove to the world that he is worth the max contract he received.

Although the Suns were eliminated early, they should succeed and bounce back this season. 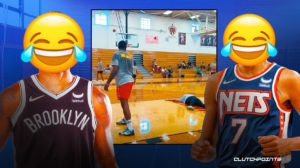