Is Trae Young the NBA’s next Stephen Curry?

Many people are constantly on the lookout for the next big upcoming superstar, and the first thing we do is compare them to current NBA stars. This of course puts huge pressure on the player to succeed, and often we put that pressure on very young shoulders. The talk right now in the GM offices around the NBA is beginning to focus on one very special talent, and that is Trae Young, a player who has already been compared to Steph Curry, a huge accolade for someone so young.

The 19-year old point guard has been putting up some hugely impressive stat lines and that has drawn attention to him. On top of that both Steph Curry himself and LeBron James have declared themselves as fans of Young, something else that has drawn huge interest to the Oklahoma point guard. Now he is in the public eye, comparisons will continue, as will projections about his potential, so if you have not heard of him before, you are sure to hear plenty about him over the next few months.

Young is currently posting the best stat lines in the country, and it was those stats that got him noticed in the first place. He is averaging a huge 29.2 points per game, as well as 10.1 assists. Looking back at the college records, only one freshman has ever been crowned the college scoring champion, and only two have led the nation in assists. As we stand now, unbelievably, Young is ahead in both of those categories. He couldn’t go and do it, could he?

Just a quick look at his stat line, and a quick look at what we have seen before from college freshmen tells you this is a very special player. When you throw in his celebrity fans, you can quickly see that this is a player who has caught the eye of all the right people. Not only is he doing the right things every game to score points and pick up assists, but he is also catching the eye of the fans, and most importantly impressing his peers. When a player is doing all three of those things, and he is only 19, it is hard to not be hugely impressed by what is going off in the career of Trae Young right now.

Perhaps the best thing that Trae Young has going for him right now is his father being constantly by his side and defending his corner. His father, Rayford Young, is a former point guard so knows more than most what is expected and how his son can move forward in the best possible way. Rayford makes no excuses about his own career, and believes he underachieved in a big way, having that hanging over him is only going to push his son even harder to be a success.

Despite averaging at least 15 points per game over his last three seasons, Rayford never made the NBA and he firmly believes that was down to him under achieving. He seems determined not to let his son fall down at the final hurdle and end up taking the same route as he did, and that can only be a good thing for Trae. There is no doubting that Trae himself wants to succeed, and wants to make the NBA, but with the additional push from his father, these two are going to make sure Trae is a force to be reckoned with.

It was during Trae’s younger days where he began the path to being a great shooter. He saw what Curry was doing, and wanted to replicate it, believing that dribbling was a boring part of the game, and shooting was where all the fun was. His mom Candice tried her best to stop his progress, by refusing to erect a basketball hoop at their family home, so Trae and Rayford went down to the local court. It was here where Rayford began to drill Trae in the art of shooting, making him shoot 50 balls from the lane, 50 from the college three point line, 50 from the NBA line and then 50 from a lot further back. This repetitive training method really drilled into Trae the importance of getting his shooting to a level where it would be almost perfect. Trae wanted to shoot the ball, Rayford saw he had a talent for it, and together they nurtured that talent and made it even better, which has made Young the dynamic talent he is right now.

What about the Future?

As much as Young has grown in stature over the past 12 months, there are still question marks about where he goes from here, and importantly where he ends up in the draft. There has been a lot of talk about Young, but in 2018 we are going to see that talking come to an end, it is time for him to be drafted into the NBA, to show what he can do. The first thing to see is that Young will be drafted into the NBA and that will happen in the first round, something that is sure to please his dad greatly.

But the question many are beginning to ask about Young, is where exactly does he go in the draft? He has rose through the rankings rapidly over recent months to cement his place in the first round and there is still time for Young to improve his position in the draft. There is little doubting that he has been the best player in college hoops so far this season, and that will ensure someone takes him fairly high. Right now, a top five spot may be a little out of race, but he shouldn’t drop too far behind that, someone will take a punt on him and whoever does that will certainly get a special player.

Alongside the wow factor that his shooting and stats bring to the table, there are question marks about his defensive play and athleticism which is something that will hold Young back when it comes to being drafted into the NBA. Many teams are now looking for a complete all-rounder in the draft, and despite what he has in his favor, Young doesn’t fit that mold. 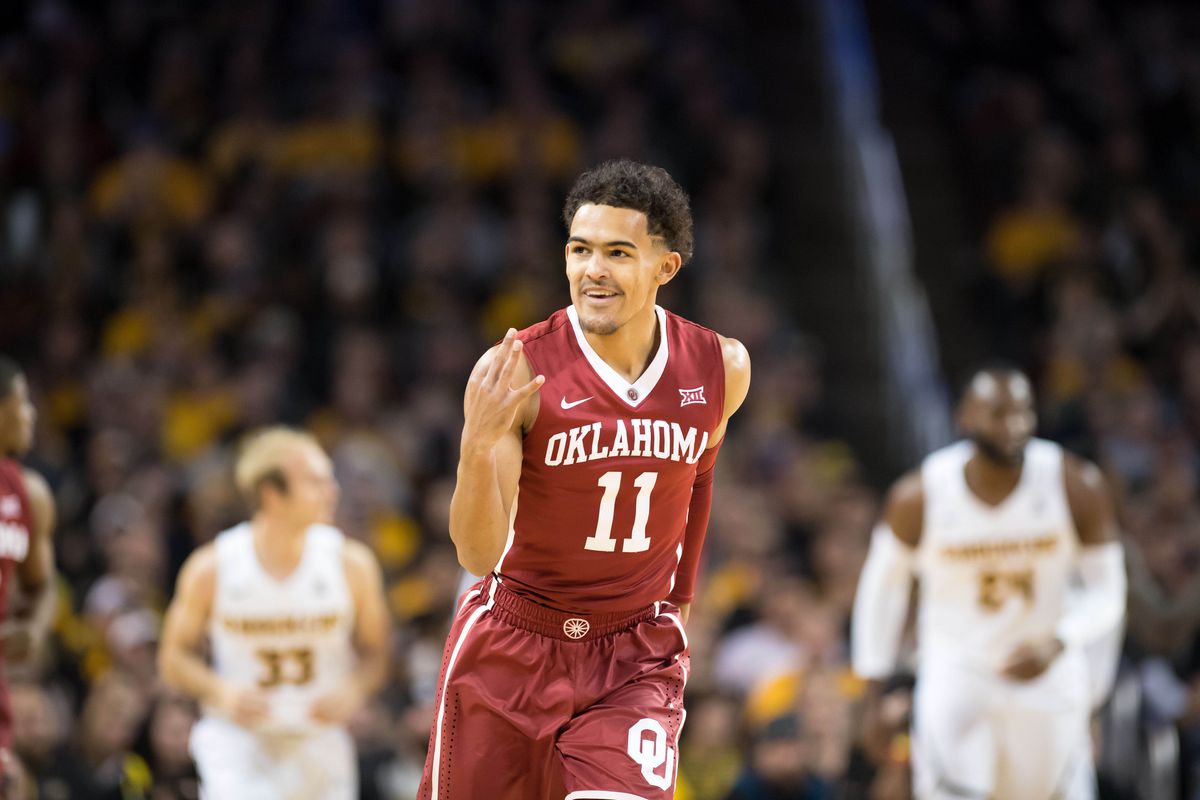 Having said that, there will always be room on the court for dynamic scorers and the more points Young puts up on the board during the remainder of this season, the higher he will go in the draft. Many teams will be willing to take a punt on him, with his upside looking unbelievable at the moment in time, and teams can also add defensive stalwarts to protect them while Young is on the court.

There remain skeptics to his game, which will continue to hurt his draft positon, but slowly those are coming round to the common belief that Young can contribute a great deal to whichever team takes him in the draft. Picking Young would be a balance of risk and reward, and his destination will depend upon which team decides to pull the trigger first.

One thing that will help the draft position of Young is the relative weakness of the point guard positon in this year’s draft. Collin Sexton appears to be the only other point guard who is certain to book himself a place on the draft board in the first round, and while he is a more rounded player, he doesn’t have the same upside as Young.

When it comes to picking a point guard, the most dynamic shooter and the player with the wow factor will usually win the battle, and that is why Young goes ahead of Sexton in the draft. Sexton will appeal to those who are unsure about Young’s defensive play and his fitness, but when it comes to wanting someone who could be special, Young will win that race hands down.

There are many people who think Trae Young could be a little special, and the group of people following him around has grown over the past 12 months. Having celebrity endorsements from some of the greatest players to ever play the game has certainly thrown him into the limelight, but that is something he has handled very well. A big part of that has been down to the mentoring given to him by his father, something that should not be underestimated both now and eventually when Young does make the NBA.

Remaining grounded and focusing on the end goal has been the talk from Young, and his father has been the one by his side drilling that into him from a very young age. While his father may regret what happened to his own career, he has a chance to live the dream through his son, and it is clear to see that he is doing all he can every step of the way to make things happen for Trae.

When the 2018 draft comes around, we will see where Young ends up, both in terms of the team he plays for and his final position. He looks sure to go in the first round, and could make a late push to make the top five. Either way, he is a joy to watch on the court, and the fans of one NBA team are going to get the chance to see a lot more from him over the coming years. There may be question marks about his defensive play and about his conditioning, but if you want a player who will get you jumping out of your seat, then get ready to enjoy Trae Young when he makes the NBA.