While the USC Trojans and Oregon Ducks are the more ballyhooed programs in the Pac-12, UCLA Bruins football has certainly made a lot of noise in the 2022 college football season. The Bruins had elite skill players who are entering NFL draft boards, while they have a favorable schedule to finish the season. Here are the four reasons why UCLA Bruins football will win the Pac-12 over conference rivals USC and Oregon.

This season, UCLA football has made some big statements. The Bruins are currently at 7-1 overall with a 4-1 conference record. In their recent games, they defeated Utah at home one week after beating a spirited Washington club. Both teams needed a lot of points, and they delivered plenty of them.

Afterward, UCLA football fell to Oregon, 45-30, before they rebounded against a hapless Stanford, 38-13. This coming weekend, the Bruins take on unranked Arizona State, which they should not have much trouble beating.

In many ways, this has been a watershed year for UCLA. Recall that they finished 8-4 overall last year with a 603 conference slate. They should finish much better than that this season. Their big gains aside, however, UCLA football is far from finished in 2022.

Again, in their most recent victory over Stanford, the Bruins took an early lead and never looked back. They punished the Cardinal defense with a powerful running onslaught led by Zach Charbonnet. On 21 carries, the top running back gained 198 yards and three touchdowns, while wide receiver Kazmeir Allen gained 66 yards and a touchdown. QB Dorian Thompson-Robinson was also highly productive with his legs, recording 50 yards and a touchdown on 13 attempts. There’s honestly a bit of in this kid. With these guys leading the way, don’t be shocked if UCLA wins the Pac-12 this year.

Having said that, here are the four reasons why UCLA Bruins football will win the Pac-12 over conference rivals USC and Oregon.

4. Zach Charbonnet is a true stud

UCLA RB Zach Charbonnet was named the Doak Walker National Running Back of the Week for Week 9 after guiding the Bruins to the win over Stanford.

Charbonnet’s rushing yards and touchdown total matched his career highs. He also grabbed five receptions for 61 yards. Charbonnet is a true stud on the ground. He currently leads the country in yards per carry average at 7.53, which would tie UCLA’s school record.

3. Dorian Thompson-Robinson is an underrated star

When QB Dorian Thompson-Robinson committed to UCLA as a high school junior in 2017, it was considered a coup for UCLA football. Remember that at the time, they just finished 4-8 the previous season. Meanwhile, Thompson-Robinson was the nation’s 36th-ranked prospect in his class at the time, according to the 247Sports Composite.

Fast forward to 2022, and Thompson-Robinson is still at UCLA. This, despite dealing with a coaching change before he even arrived and experiencing many more defeats than victories. In 2022, the 22-year-old is undoubtedly delivering on the potential he showed in high school for a squad that’s far exceeded expectations.

Keep in mind that over the previous four seasons, DTR has completed 61 percent of his throws for 7,541 yards and 61 touchdowns with 26 interceptions. He has also rushed for 1,181 yards and 16 touchdowns. He was a solid recruit for the team who developed into the role from the start just as Chip Kelly took over. In 2021, he was even named to the Pac-12 Second Team.

Right now, Thompson-Robinson is among the elite in the country in completion percentage (72.3 percent) and top 10 in passing efficiency with a 165.7 rating this season. He has passed for 1,971 yards, 17 touchdowns, and only three interceptions while also rushing for 319 yards and five scores. These have helped establish him as a dark horse Heisman Trophy contender. That’s quite unheard of for UCLA football in recent years, and it’s one big reason he’ll lead them to the top of the Pac-12 this season.

2. USC and Oregon will stumble in their last few assignments 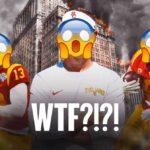 USC people most to blame for Cotton Bowl loss to Tulane 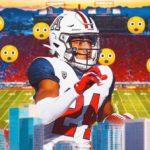 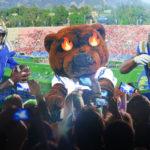 UCLA’s loss to Oregon a couple of weeks ago was unfortunate, but we believe the Bruins can still win the conference. A look at the remaining games suggests that both USC and Oregon have tougher schedules than UCLA. We feel that the Trojans and Ducks will eventually stumble, opening the door for the Bruins to take over the conference. The Ducks actually have the toughest schedule among the three.

Oregon will face Colorado, Washington, #14 Utah, and #23 Oregon State. The Ducks should handily win over the Buffaloes and Huskies. However, we see them losing to both the Utes and their in-state rivals.

Meanwhile, USC football will face Cal State, Colorado, UCLA, and Notre Dame. The Trojans should easily beat the other two teams but will lose to UCLA and be upset by Notre Dame.

As for UCLA football, we have the Bruins riding high to close the season and sweep their last four outings.

UCLA will face Arizona State, Arizona, #9 USC, and Cal State. We have UCLA sweeping all those games. The Bruins should not have much trouble against three of those four assignments. The big game is obviously the one against USC in Week 12. That should be a wild and tightly-contested affair. Still, we are confident the Bruins have a better ground game, which should carry them through. We are also counting on UCLA football sack machine Laiatu Latu to get into USC QB Caleb Williams’ head and just run him over.

UCLA football last won the Pac-12 way back in 1998. They’ll make history and ride their momentum back to the top this year and break that 24-year dry spell. They’ll claim Pac-12 title No. 18 before they leave for the Big Ten in 2024.