Regardless of what the San Francisco 49ers choose to do with the 3rd overall pick in the 2021 NFL draft, it looks like Jimmy Garoppolo is on the outside looking in regarding San Francisco’s future. Kyle Shanahan is clearly looking for a reboot on the offensive end, and all Garoppolo can hope for is a way to land on his feet.

Luckily for him, there are plenty of teams that are in the market for a franchise quarterback, and injuries or no, Garoppolo is only two years removed from leading San Francisco to a Super Bowl. Even luckier for Garoppolo,  a lot of these teams on the market have solid rosters and coaching — all they’re missing is a leader under center.

In that case, there are three destinations that immediately stand out as potential forever homes for the NFL’s most handsome quarterback. Let’s find Garoppolo a family that wants him, shall we?

Oh boy, would this work in a vacuum. Sure, Atlanta would have to give up a major piece, most likely Julio Jones, in order to get Garoppolo’s services. But give him a year to recuperate behind Matt Ryan, and Atlanta won’t even need to think quarterback in the draft. Hell, they could probably afford to trade down.

However, there is a glaring flaw in Atlanta’s case for a top flight destination for Jimmy-G. Their offensive line and defense are both god-awful, and with his injury history, that offensive line is too shaky to take on such a risk. Sure, they could opt to shore it up in the draft, but either tackle spot is a nightmare for college players to adjust to, let alone the sheer importance of the blindside tackle.

Rare is the rookie lineman that shines on either end, and Jimmy’s injury history is too damning for Atlanta to look at him seriously. No, if they’re to find a replacement for Matt Ryan, it will have to be someone much younger and/or healthier.

So the prodigal son returns to the spring of his youth, and to the father figure that made him who he is.

Cards on the table: the New England Patriots need a quarterback and leader. Cam Newton is a solid veteran presence, and his rushing has been a modest pleasant surprise coming back from injury, but he still can’t throw and has no one to throw to.

Head coach Bill Belichick is lying to himself, owner Robert Kraft, and the entirety of New England if he says he doesn’t miss Garoppolo’s services. In limited time, Jimmy-G was an absolute surgeon in Belichick’s system, and if the Patriots miss out on any one of this draft class’ top quarterback talent, they could do much worse than trading some overpaid pieces for Garoppolo.

Let Jimmy come home to the place of his youth, and you could have a heartwarming and wildly successful reunion.

How in the hell is this going to work, you ask?

Well for one, the Saints will have to give up even more pieces just to make the money work. Some key defensive and offensive pieces will go, as will either one of their incumbent signal callers. 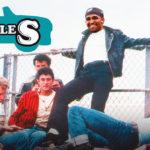 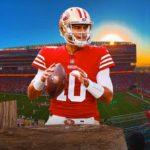 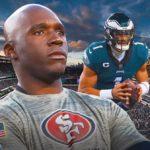 But here’s the kicker: New Orleans is still a Sean Payton-led team, and it still has a pair of stellar backs in Alvin Kamara and Latavius Murray. They might not have a defense if this trade goes through, but they’ll definitely be in games with these offensive pieces led by someone of Garoppolo’s caliber, who is at least a two-tier upgrade over either Taysom Hill or Jameis Winston.

Sean Payton has a very complex, motion and slant-heavy system on offense, and Garoppolo, if nothing else, has proven to have the smarts and pedigree to handle such a system. He’ll have the Saints marching out of this rebuild and into NFC South contention in no time.

Doesn’t Jimmy Garoppolo just look like a Chicago Bear to you? He’s the type of quarterback that just oozes tradition from every pore, and is a proven winner (no, you don’t count Nick Foles).

Speaking of Nick Foles, everything said about New Orleans holds true here. Most every one in the world is unsatisfied with how Garoppolo’s injury history has derailed his stock as a player, but can you honestly say that you’d take either Foles or Mitch Trubisky over him? Yikes.

If the Bears’ defense could keep them in playoff contention last year, with the absolute dumpster fire that they were on offense, upgrading to an actual starting-caliber (at least) signal caller will shoot this team into the stratosphere. Of all these teams, the Bears can afford to give up the most for Garoppolo’s services, and damn well they should.