The NBA unveiled a unique new event during 2022 Summer League, allowing Richard Jefferson to make a guest appearance as a referee. The former NBA champion and media personality put on a different type of uniform and stepped in for the second quarter of the Knicks and Trail Blazers Summer League matchup. Jefferson was a massive success and brought some life to the crowd. He was mostly met with supportive cheers even for little actions such as handing off the ball to be thrown in.

Following the quarter in which he took control of the game, Richard Jefferson spoke highly of the position. He joked that he would love to return next Summer League and would be willing to train to improve at the craft. The 18-year NBA vet was a great choice to serve in the role of a guest referee. It provided an interesting storyline to the game and created some buzz online. Given the success of the night, this could be a fun wrinkle to add to the Summer League moving forward. Adding a notable referee could provide fans with a fun new reason to tune in. Following the success of Richard Jefferson’s debut, here are three other players the NBA should set up with a refereeing debut.

One NBA player who is never afraid to share his opinion of referees is Draymond Green. The four-time champion has been vocal throughout his career on and off the court. Green is firm in his opinion of referees being able to be conversational and explain their calls to players throughout the game. He also is not afraid to push the limits and has been in the mix for leading the league in technical fouls throughout his career. The former Defensive Player of the Year ended last season tied for second in the NBA with 18 technical fouls. He also led the NBA in technical fouls in 2016 and 2019.

Draymond Green is one tech away from a suspension. pic.twitter.com/HElaW1PTBE

Bringing his passionate energy to the court as a referee would be must-see television. It is one thing to be critical of referees but a different thing when wearing the uniform. While he can rub people the wrong way at times, Draymond Green is typically self-aware and likely would enjoy participating in the event just like Richard Jefferson. Handing Draymond Green a referee whistle would be a win-win all around and something NBA fans would enjoy greatly.

Another guy who is known for his spats with referees, DeMarcus Cousins would be a hilarious referee. The 31-year-old has 136 career technical fouls and has been ejected 14 times throughout his career. Boogie may not be the superstar player he once was but still played some really impactful minutes with the Nuggets last season.

As he remains a free agent for the upcoming season, maybe some time as a referee would spark interest. The four-time All-Star is an entertaining personality who would put on a show with the stripes on. Getting a look at him on the other side of a referee argument would undoubtedly make the event worth watching.

He is not known for his referee interactions, but Anthony Edwards would be must-see television with the referee stripes on. The 20-year-old has a fun-loving personality that he is not afraid to let shine. From basketball to rapping to basketball, Edwards is a man of many talents. He recently excelled in his role in the new movie, Hustle, and is one of the NBA’s rising stars. It would be worthwhile to add guest refereeing to his ever-growing list of accomplishments.

As the league looks toward the next generation of superstars, Anthony Edwards should be front and center in this conversation. The former number one overall pick helped elevate the Timberwolves to a playoff-caliber team after missing out the previous three seasons.

While the NBA is still obviously still focused on producing the highest quality of basketball, the league would do well to lean into these types of events. It also is worth noting that the guest referee is surrounded by a team that has been properly trained so it does not jeopardize the dignity of the game. Richard Jefferson found this out by having one of his calls overruled in his debut. Putting some of the league’s most entertaining personalities on display could help grow viewership and give fans another outlet for enjoyment. Edwards should certainly be front and center for this type of role. While it is unclear if the NBA has plans to further explore this outlet, it could increase Summer League viewership and allow another window into the personality of the players. 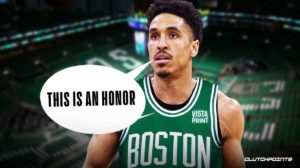