The Minnesota Vikings look to have a solid roster heading into the 2020 season, but there is always room for improvement to take that next step forward. The pickings are getting slim in free agency, but there are still a few trades that the team could try to swing.

Let’s take a look at the five best current trade options for the Vikings.

Who knows what it would take to get a trade down with the Jacksonville Jaguars for Yannick Ngakoue, but if they are willing to give him up for cheap, the Vikings would make a lot of sense. The team placed the franchise tag on Ngakoue, but all signs point towards him to not sign it, and the only way we might see him on the field during the 2020 season will probably be if he is on a new team.

The Vikings has Danielle Hunter, but Everson Griffen hasn’t been brought back. Lining up another solid player like Ngakoue across from Hunter would be a game-changer again this season for the Vikings.

Another trade that might be too high of asking price, but would be a game-changer for the Vikings would be bringing in Jamal Adams. Anthony Harris has signed his franchise tag for 2020 season, but if the team could work out a long-term deal with Jamal Adams at a reasonable price, it could make sense to swing a trade. Harris is going to need to get a long-term deal after this season if the Vikings want to keep him.

If the team could get a guy like Adams for only a few million more a year, it could make a whole lot of sense for the Vikings to pursue that.

This might be a bit of a head-scratcher for some, but bringing in Los Angeles Rams wide receiver Josh Reynolds for a late-round draft pick could make sense. With the Rams, Reynolds has been stuck behind Robert Woods, Cooper Kupp, and Brandon Cooks. With the Vikings, he would be able to take on a bigger role, which would mean an uptick in stats. In the last two seasons, Reynolds has caught 50 passes for 728 yards and six touchdowns.

After Adam Thielen, there are question marks—something Reynolds could help with. If Justin Jefferson could be WR3 in year one, that would make the offense even more explosive. 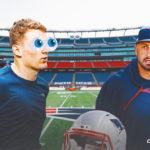 Will Brian Hoyer be back with the Patriots in 2023?

With the COVID-19 pandemic, having a backup quarterback is even more important for the 2020 season. The Vikings currently have Sean Mannion who looks to be in line to be the backup again this year. With Kirk Cousins were to test positive or go down with an injury, trusting Mannion to win a game is a scary thought. With the New England Patriots signing Cam Newton, Hoyer all of a sudden is a player from which the team could move on.

It probably wouldn’t take a whole lot to swing a trade, and this is one the Vikings seriously need to consider.

Getting Ngakoue would be nice, but a player that might make more sense is Ryan Kerrigan. The Redskins selected Chase Young in the 2020 draft, and they still have Montez Sweat on the roster. Those are two players who need to be on the field, which means Kerrigan might take the back burner.

Kerrigan is also entering the last year of his contract, and with the Redskins probably not being a playoff team this year, trading him away for an asset would make a lot of sense. If the Vikings could get him for a season for a fourth- or fifth-round draft pick, that would be a big boost for the team’s defense.