The Los Angeles Clippers’ new stadium isn’t going to open its doors to the public until 2024, but already, fans are getting all excited for the brand-new Intuit Dome in Inglewood. This has a lot to do with team owner Steve Ballmer recently flexing his new $2 billion facility, and if you saw the sneak peek of the stadium, you’ll definitely understand why there’s so much hype around it.

In Ballmer’s exclusive tour for ESPN’s Ohm Youngmisuk, the Clippers owner decided to take a bit of a veiled shot at former player Chris Paul and his infamous tunnel incident many years ago. For those that require context, CP3 supposedly led his Houston Rockets teammate to a secret tunnel in Staples Center — one that he learned about during his time in LA — to confront the Clippers players following a heated battle on the court. This incident took on a life of its own, and Ballmer could not help but joke about it in his recent tour (h/t Joey Linn of the SunHerald):

“Locker rooms here, practice courts are back that way,” Ballmer said. “Lets just say, as you know, there are back halls at Staples [Center] between visitors [and the home team]. Ya, we don’t want that. I’m just gonna say that. We don’t want any back hallways.”

PART 1: Steve Ballmer took me inside the construction site of the Intuit Dome and we talked about the Clippers’ finally having their own home complete with a Wall of sound and no secret hallways and how the dome is “another statement that says, ‘Hey look, we're nobody’s brother” pic.twitter.com/8Z4VkAIRzi

Ballmer did not name-drop Chris Paul in his statement, but it is clear what he’s talking about here. It was a message delivered in jest, and the Clippers owner had no intention of maligning the future Hall of Famer with his playful jab here.

What cannot be denied, however, is that Ballmer seems dead set on outdoing their cross-town rivals, the Los Angeles Lakers, and their renowned Staples Center. It looks like he might just succeed with his lofty objective. 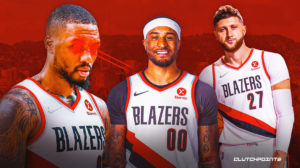