Orlando Magic rookie Paolo Banchero already got his “Welcome to the league” moment even before he steps foot on an NBA court, courtesy of new Atlanta Hawks star Dejounte Murray.

During their recent showdown at Isaiah Thomas’ Zeke-End tournament, Murray slapped Banchero with the ultimate disrespect. After fooling the no. 1 overall of the 2022 NBA draft with a fake pass and making him spin, he proceeded to dunk the ball off a backboard alley-oop to himself.

Murray also appeared to shout something at Banchero after the play before throwing the ball at him.

What Dejounte Murray did here to Paolo Banchero was just flat out FILTHY 🤮pic.twitter.com/fdUEjua6U5

While we don’t know what Dejounte Murray said to Paolo Banchero, we’re pretty sure it’s some trash talk and definitely not good. Besides, the Hawks guard wouldn’t have thrown the ball like that if it isn’t any kind of disrespect.

As for Banchero, he’ll certainly remember that moment. Hopefully, though, it won’t affect him too much. After all, he is going to meet Murray a lot more since the Magic and the Hawks are in the same conference.

Maybe Banchero can take his revenge on Murray’s disrespect when they meet again in the NBA’s regular season? Certainly, that’s better as compared to getting demolished in other basketball tournaments and Pro Am leagues.

For now, we have to give it to Murray for his intense play. While NBA players usually don’t go all out in non-NBA games, he always entertains and puts on a show for those fans in attendance that are seeing them play live for the first time. 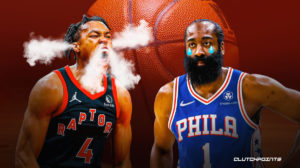