There’s been smoke coming from the Los Angeles Lakers franchise throughout this season and it’s not hard to imagine there have been actual fires.

In the middle of the Lakers’ embarrassing blowout loss to the New Orleans Pelicans on Sunday night, team owner Jeanie Buss was seen very visibly walking out on her team:

Jeanie Buss is fed up

NBA personality Bill Simmons, who’s often plugged in on the happenings around the league, spoke out on the Lakers’ situation on the latest episode of The Bill Simmons Podcast. He first sounded off on LeBron James over his several eyebrow-raising statements during All-Star Weekend that hinted towards his personal frustrations and ultimately undermined the Lakers organization for underachieving.

However, it’s hard to imagine LeBron’s fingerprints weren’t all over their decision-making process in the offseason, particularly their splashy acquisition of Russell Westbrook that used up any remaining trade powder the team had for future moves.

“LeBron spent all of All-Star weekend putting stuff out there. Floating Sam Presti, floating the ‘I’m only going to play when Bronny James is coming to the league. I am playing with him. That’s how you get me to your team.’ Floating some third party stuff that they then denied after about how they had tried to facilitate these Westbrook trades. They were unhappy and taking no accountability for any of it.”

There were numerous reports over the offseason about how the Westbrook-to-LA train ultimately garnered steam and eventually arrived at its cross-country destination. Westbrook had met with LeBron and fellow Klutch Sports client Anthony Davis in James’ LA home to discuss manifesting a trade to team up under purple and gold colors. For LeBron James to now passive-aggressively hint at being unhappy in a situation that he definitely helped mold was said to not sit well with Jeanie Buss.

According to Bill Simmons, the Lakers team owner “stood up” to LeBron James’ camp as a way to right the ship amid the tension growing internally within the franchise.

“Jeanie Buss is a tough lady, man. She’s been in the league since the early eighties and I think at some point she stood up to those guys and was like, ‘No, stop. You don’t get to undermine all this. Stop. You’re here. You’re under contract next year. What are we doing?’ and I think they had a powwow, that’s what I heard. But I think she stood up for at least something. For them to unwind last week and pretend they weren’t chaos agents was really strange.”

King James may have brought a title to LA after a decade-long drought, but it’s not their first rodeo. They aren’t indebted to him like the Cleveland Cavaliers forever will be. While whispers of any confrontation with Jeanie Buss remain to just be rumors, it’s hard to imagine the most powerful person within the Lakers organization backing down to anyone, even LeBron James. 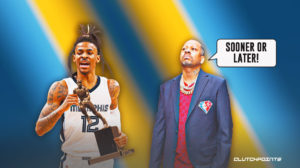 Angels’ Archie Bradley fractured elbow falling out of dugout in brawl vs. Mariners