The Denver Nuggets suffered their first major casualty of the season after it was announced veteran forward Paul Millsap would miss some time with a torn ligament in his wrist. However, things may have potentially taken a turn for the worst.

Promising center Nikola Jokic had to leave tonight’s game versus the juggernaut Houston Rockets after suffering what appears to be an ankle injury during the second quarter:

Denver is now without both of their best frontcourt players at a time where many felt they could emerge as a legitimate playoff team. Although the severity of his injury is still unknown, it does not appear as if he will be returning to the court anytime soon — especially with the Rockets already building on a double-digit lead.

Even more concerning is that is seemed to be a non-contact injury, which often times wound up resulting in longer recovery periods. Fortunately, “The Joker” was able to walk back to the locker room under his own power meaning it could be just a minor scare.

Jokic was looking forward to getting his teammates more involved following the injury to Paul Millsap just a few days ago. However, it seems the Nuggets may have to rely heavily on forwards Wilson Chandler and Kenneth Faried in the meantime. 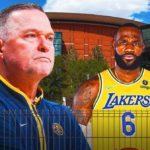