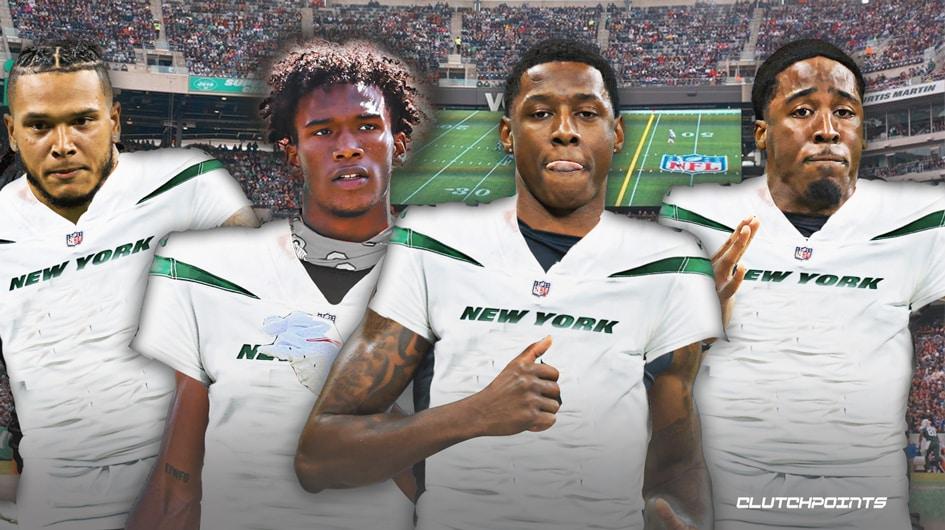 The New York Jets have received high marks for their work at the 2022 NFL Draft. They landed three first-round picks, two in the top 10 of the draft, and a second rounder who was projected by many to be a first-round selection. The Jets filled holes at corner (Sauce Gardner) and edge rusher (Jermaine Johnson and Micheal Clemons), and added a pair of playmakers on offense (Garrett Wilson and Breece Hall).

Nothing that’s happened during OTAs nor mini camp has diminished the high hopes the Jets have for their 2022 draft class. But training camp starts in a few weeks, followed by preseason games and the grind of a 17-game regular season. There will be reality checks along the way.

So, what realistically can be expected from each of these rookies in their first NFL season?

You’d be hard pressed to find football people who believe Gardner will fail to be a star in the NFL.

He’s been compared to Jalen Ramsey, among other top cornerbacks, after a brilliant collegiate career at Cincinnati, where he didn’t allow a touchdown in three seasons.

Though coach Robert Saleh played him with the second unit much of the offseason and said he needed to beat out incumbent Bryce Hall to start alongside D.J. Reed, no one expects Gardner to be on the bench in Week 1 against the Baltimore Ravens.

But this doesn’t mean Gardner won’t have a difficult time adjusting to the NFL. It’s taken many, if not most, of the great corners time to reach stardom. Cornerback is viewed by most experts to be the most difficult position to master in the NFL.

Ryan Dunleavy of the New York Post did some research recently on this topic. He found that of the 21 corners selected in the top 10 of the draft since 2000, only two (Patrick Peterson in 2011 and Denzel Ward in 2018) made All-Pro as a rookie.

So, the odds say that as great as Gardner likely will be one day, he’s equally as likely to struggle some as a rookie. To what degree will he struggle? We’ll find out. But having Reed on the opposite side should be a big help to Gardner. The emerging veteran could face some top receivers while Gardner is still getting his feet wet as a rookie.

It should be fair to expect a strong rookie season from Gardner, but one in which he also must overcome adversity.

Unlike Gardner, Wilson plays a position where rookies have found stardom right away in the NFL. Ja’Marr Chase and Justin Jefferson certainly proved that the past two seasons.

Wilson has all the tools to be a star in the NFL and should be helped by playing in a system that features two other solid receivers in Corey Davis and Elijah Moore. He’s impressed in offseason workouts, playing the slot and on the outside, and has been developing chemistry with quarterback Zach Wilson.

He seems to be a quick study on and off the field, though his clueless reaction to finding out what a rookie dinner may cost him shows he does have things to learn.

Last season, Wilson thrived playing alongside Jaxon Smith-Njigba and Chris Olave at Ohio State. He had 70 receptions for 1,058 yards (15.1 per catch) and 12 touchdowns.

It’s fair to expect that he could approach those numbers — likely not the touchdown total, though — as a rookie in the NFL. How Zach Wilson distributes the ball to a growing group of talented receivers, tight ends and running backs is likely the bigger variable here than if Garrett Wilson can live up to high expectations.

Saleh and general manager Joe Douglas were ecstatic when the Jets were able to trade back into the first round and select Johnson. Now it’s up to him to prove Jets brass was right to be so excited about their “Christmas present.”

Flight 2022: New Heights has been out for one week and we've actually been watching this scene on repeat since.

The Jets play a heavy rotation on their defensive line, which should help put Johnson in the best positions to succeed. He could be a Week 1 starter, with Carl Lawson on the other end and Quinnen Williams and John Franklin-Myers on the interior of the line. Or he could be part of a second unit with Saleh and defensive coordinator Jeff Ulbrich choosing which spots are best for the Florida State rookie.

While many may judge Johnson’s success in his first season by the number of sacks and QB pressures he piles up (he had 11.5 sacks last season), it could be his play in the running game that makes him stand out. Johnson is exceptional against the run, and had 70 tackles, including 17.5 for a loss, in 2021.

There’s going to be heavy competition among the “monsters,” as Lawson calls the Jets defensive lineman, but Johnson is going to play his fair share and should make a solid contribution.

Hall will be part of a rotation as well  this season. He and second-year pro Michael Carter are an exciting 1, 1A tandem at running back.

Though Carter led the Jets in rushing last season, there’s a good chance Hall emerges to be more of the lead back in 2022. He won’t have to be the workhorse he was throughout his college career at Iowa State, where he racked up 3,044 yards and 41 touchdowns in two seasons as a starter, but should wind up with more touches than Carter.

Being in a rotation will keep Hall fresh but could keep him under the 1,000-yard mark as a rookie. That won’t matter. He is going to be a difference maker for the Jets in his first season. Hall will make life easier for Zach Wilson in his second year as the Jets finally build a consistent running game.

If all goes according to plan, this will be almost a redshirt season for Ruckert. He’ll spend a season learning behind two very good veteran tight ends, C.J. Uzomah and Tyler Conklin.

Long term, the Jets view the Long Island native as their tight end of the future. In the short term, he’ll work on becoming a professional receiver and blocker.

Don’t rule out Ruckert making some plays when given the opportunity to do so, though. It’s hard to imagine the Jets will keep him on lockdown all season.

Mitchell is more of a redshirt option than Ruckert. It’s hard to envision scenarios where Mitchell would play much, if at all, as a rookie.

If starters Mekhi Becton or George Fant go down, expect the Jets to pick up another veteran or turn to a more experienced in-house candidate like Connor McDermott.

Mitchell could be a valuable reserve or possibly a future starter. That time is not this season, however.

Clemons was the Jets final selection in the 2022 NFL Draft. But he very well could play an important role on the defensive line as a rookie.

There are those who believe Clemons, who has a mean streak and plays with super intensity, could be a better pass rusher than Johnson. He had seven sacks last season at Texas A&M and projects to be a solid NFL player if he stays the course and out of the trouble that plagued him in college.

Keep an eye on him in training camp and preseason. Clemons might become a key contributor, if not in Week 1 then at some point during the season.