One of the figures who continue to ascend to stardom in the fast-rising esports industry is Toronto native Michael Grzesiek, better known in the online world as “shroud” (formerly mEclipse).

He was a former professional player in Counter-Strike: Global Offensive (CS:GO), but he has since expanded his horizons by being a Twitch streamer and a Youtube content creator where he continues to see more success. With a huge following on social media along with various sponsors, money just keeps coming in for the 26-year-old.

According to Famous People Today, Shroud has an estimated net worth of $16 million in 2020. He first made noise in the CS:GO arena as he competed with several E-sports Entertainment Association League (ESEA) teams, particularly Exertus eSports and Manajuma. He was later signed by compLexity Gaming (an American professional esports organization) as a stand-in before eventually moving to Cloud9 in August of 2014.

Grzesiek’s most notable achievement for the Cloud9 was when he led the team to a first-place finish at ESL Pro League Season 4 back in 2016 as they defeated SK Gaming to net $200,000. His team also placed second in the ESL One Cologne tournament in the following year.

In August of 2017, it was announced that Shroud and longtime teammate Jordan “n0thing” Gilbert would be stepping down from Cloud9’s active roster. Several months later in early 2018, Grzesiek ultimately left the team and hung his boots from professional CS:GO. During his competitive career, shroud’s teams won an estimated total of $668,000.

He then decided to take his talents to a similar market in the streaming industry through Twitch. He continued to stream on the platform until October 2019 and went on to cross the fence and join Mixer, Microsoft’s streaming platform. He also followed in the footsteps of another well-known streamer in Tyler “Ninja” Blevins who announced a similar deal earlier that year.

Grzesiek’s deal with Mixer is reported to be at a lucrative price tag of $10 million, which convinced him to leave behind his enormous community in Twitch and join a rival site.

On June 22, 2020, Microsoft announced that it would be shutting down Mixer and went on to partner with the newly established Facebook Gaming segment. Following the abrupt closure, Grzesiek announced that he would return to stream exclusively on Twitch back in August of 2020. The first stream of his second stint on the platform was highly-anticipated and peaked at over 516,000 viewers.

His decision to venture on a new path ultimately paid dividends for him, as he became one of the gaming world’s most popular streamers today. As of October 2020, he has already streamed for over 7,900 hours on Twitch and has acquired over 395 million total views and counting.

Shroud boasts roughly 8.3 million followers on the platform, along with almost 1.4 million followers on both Twitter and Instagram. On top of that, his YouTube channel has accumulated a staggering number of 5,500,000 subscribers and over half a billion total views of his videos, which usually compose of his game highlights. His videos roughly average around 500,000 views each, which would see him earn in the estimated range of $400,000-$500,000 annually.

Shroud plays a variety of games on his streams, but his inclination is more towards battle royale games and first-person shooters. His most played games are PlayerUnknown’s Battlegrounds (PUBG), CS:GO, Apex Legends, Valorant, Fortnite Battle Royale, and Escape From Tarkov. He has also put a lot of hours into streaming Rainbow Six: Siege, Grand Theft Auto V, Call of Duty: Modern Warfare, and World of Warcraft. 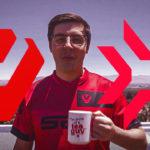 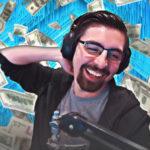 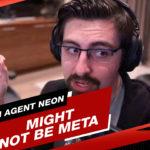 Grzesiek was nominated for the Trending Gamer award in The Game Awards back in 2017, only to lose to Guy “Dr DisRespect” Beahm. In November of 2019, he was called in for nomination for the Streamer of the Year recognition in the Esports Awards and was once again beaten by Beahm for the honor. A month later, he finally won as the Content Creator of the Year in The Game Awards.

Additionally, there are a number of international brands that sponsor Shroud, including Madrinas Coffee, HyperX, MSI, Logitech, Crunchyroll, and clothing brand J!nx, where he has an exclusive collection of merchandise under his name.

Ever since he started back in 2013, Shroud has already attained a ton of success in the early stages of his young career–both as a professional gamer and a game streamer. With the market’s rapidly growing popularity and influence, fans and enthusiasts of the gaming world should expect to see more from him in the coming years.