The story of how Aaron Rodgers became the no. 24 pick in the 2005 NFL Draft

Coming into the 2005 NFL Draft, there were many who believed that Aaron Rodgers might be the top overall pick. The San Francisco 49ers owned the selection and everyone knew they were going to draft a quarterback. But the question was which one?

Alex Smith and Rodgers were considered the top two quarterback prospects that year. One of them was going to go as the first pick. Different NFL analysts constantly changed tunes on who would be plucked by the 49ers all the way up to the actual draft.

According to Rob Demovsky of ESPN, when Rodgers entered the green room of the 2005 NFL Draft, he already knew he wasn’t going to be the no. 1 pick. Word apparently reached his camp that the 49ers will be drafting Smith. However, Rodgers, a standout from the University of California, still believed he would be one of the first players off the board.

Rodgers had a great workout with Jon Gruden and the Tampa Bay Buccaneers, who owned the fifth pick. But instead of selecting Rodgers, the team went with running back Cadillac Williams and that’s when the free fall started.

There weren’t many teams looking for a first round quarterback in the draft, which was the main reason for the slip. ESPN analyst Mel Kiper Jr. pointed out that even though there were a lot of busts before Rodgers was drafted, most of those teams didn’t feel like they needed a signal-caller.

“How did he drop? It was a year where once they took Smith then you look down and you saw who was going to take the quarterback next? There were some busts in there, some major busts in that group. David Pollack to Cincinnati did nothing. Erasmus James to Minnesota did nothing. Alex Barron to St. Louis. Matt Jones was a complete bust in Jacksonville. Mark Clayton didn’t have a great career. There was a lot of busts in that group. Mike Williams, I liked him coming out of USC, but he was a bust to the Lions. Carlos Rogers was OK. Troy Williamson was a bust to Minnesota. So to me, it was just a crazy year. He started to slide and then you looked at teams and said, ‘Well, they don’t really need a quarterback.’ That’s what happens.”

As Rodgers continued to wait for his name to be called, he admitted he was a bit embarrassed. Why? His buddies continued to crack on him for falling in the draft. 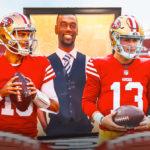 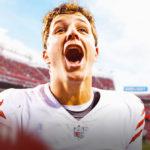 “It’s embarrassing. You know the whole world is watching, your phone’s buzzing every two minutes and you’re hoping it’s a team calling. But it’s just your buddies just making jokes, and it’s hard to laugh in a situation where you know everybody’s laughing at you.”

When the Packers were on the clock, they decided to use all 15 minutes to see if any team needing a quarterback would call to make a trade. No offer ever came in, and the rest was history, as the Packers found their franchise player in Aaron Rodgers.