‘Hard Knocks’ to feature Dallas Cowboys this season on HBO

Dallas Cowboys owner Jerry Jones has never been one to shy away from speaking his mind and getting in front of any cameras or microphones. Well his team, along with Jones, will have plenty of opportunities for that this summer.

HBO’s “Hard Knocks,” will be heading to Dallas this summer to continue their yearly series featuring one NFL team and their run through the offseason and training camp.

News: The Dallas Cowboys will be the “Hard Knocks” team this season. The five-episode series debuts Aug. 10 on HBO. Live Schreiber returns as narrator.

It’s the third time the Cowboys will be the team highlighted and followed throughout on the show. Dallas also appeared in 2002 and 2008, via John Ourand of the Sports Business Journal.

It was a big offseason for the Cowboys as they finally saddled up and paid star quarterback Dak Prescott a hefty payday. With Prescott’s future now comfortably cemented in with Dallas, the quarterback will look to return from a gruesome ankle injury and get Dallas back to the postseason.

The NFC East figures to be wide open yet again in 2021 after the Washington Football Team won the division a year ago with a record of 7-9. That’s correct, 7-9 won the NFC East last year. 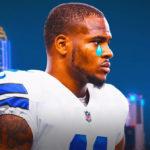 While 2021 figures to be more competitive in terms of wins and losses, it should be tightly contested again and the Cowboys have as good a shot as any of the four teams as long as Prescott is back and healthy.

Fans and viewers will get a good look at Prescott and his rehab work during Hark Knocks, or at least that’s the assumption. Cowboys fans will have their fingers crossed he can return to form and carry the load for Dallas.

When in doubt, call up Jerry Jones and he will certainly sign up for more publicity.