The Arch Manning sweepstakes is taking the college football world by storm, as fans and pundits are waiting with bated breath to see who will land one of the most highly anticipated recruits of all time. The nephew of Super Bowl winning quarterbacks Peyton and Eli Manning, Arch Manning has drawn the interest of some of the nation’s top programs, such as Alabama, Georgia and Texas. His next visit is bad news for Nick Saban and the Crimson Tide, however, as reported by The Athletic.

We got a major clue that Alabama may be slipping out of the running last week when the Crimson Tide accepted a commitment from four-star Eli Holstein of Zachary (La.) High, a top-50 national player. Tracking Manning’s recruitment will be as simple as monitoring his visits. He’s heading to Athens, Ga., this weekend, and Georgia and Texas appear to be the two teams to beat right now.

Manning is planning on visiting Georgia, who won the National Championship over the Crimson Tide this past season, this weekend. That’s certainly not good news for Sabana and Alabama, who landed four-star quarterback recruit Eli Holstein this past week.

While one can never rule out Saban and the Crimson Tide when it comes to recruiting matters, it’s becoming more likely that Goergia or Texas lands Manning.

Whoever does will be getting a potential generational recruit. 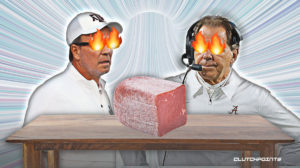