Kevin Garnett fires back at internet trying to start beef between him, Kenyon Martin

Kenyon Martin recently called out Hall of Famer Kevin Garnett for being a “porch puppy“. It was a blatant jab from Martin, and the general belief is that Garnett would fire back with some of his own smack talk. Sorry to disappoint, folks, but the former league MVP has — rather surprisingly — decided to take the high road.

Garnett took to social media to kill off the supposed beef even before it started: 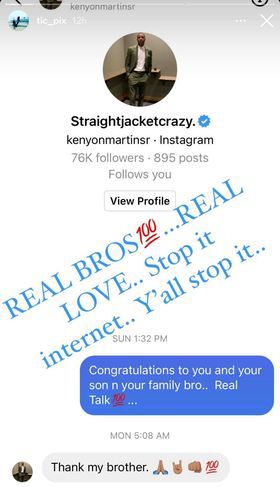 Garnett posted a brief yet meaningful chat exchange between himself and Martin on Instagram. According to Garnett, he and Martin are “real bros,” and the internet should just stop trying to create a feud between them.

For those in need of context, Martin likened Garnett to a “porch puppy,” as opposed to a “guard dog.” Martin even went on to say that Garnett was a “miniature chihuahua in a Dobermann’s body,” and described an in-game encounter between them that ultimately ended up with Garnett backing down.

Garnett is without a doubt one of the biggest smack talkers in league history, but as it appears, he found his match in Martin. Martin himself was a tough dude, and he was not one to back down — not even to a big name such as Garnett.

Kevin Garnett’s reaction is honestly a tad disappointing. We were looking forward to a war of words between these two retired legends, but as it turns out, Garnett has nothing but love for Martin.

All is well that ends well for these two former NBA players.

JUST IN: Isaiah Thomas hints that Clippers should give him a shot
Related TopicsKenyon MartinKevin Garnett