Despite interest from various NFL teams, the Michigan Wolverines managed to keep head coach Jim Harbaugh in Ann Arbor. Harbaugh was heavily linked to both the Raiders’ and Vikings’ vacancies at separate points of the head coach hiring cycle, but both teams elected to hire different candidates. Thus, Harbaugh returned to Michigan, who welcomed him back with open arms, and apparently, a brand new contract. The university announced Wednesday that Harbaugh had agreed to a new five-year contract that will run through the 2026 season.

The University of Michigan and head coach Jim Harbaugh have agreed to a contract extension.

Harbaugh had just signed a new contract with Michigan in January of 2021, but the interest from the NFL has prompted the school to tack on an additional year, and likely throw in some more money, too.

“I love Michigan Football, the University of Michigan and the Ann Arbor community,” said Harbaugh via MGoBlue. “My family and I are excited to continue leading this football program, and we are thankful for the support that our athletic department and university administration have demonstrated toward the team. I appreciate all that our players, coaches and staff are doing to excel on and off the football field. My enthusiasm for tomorrow, the day after and every day following is as high as ever, and we are ready to get on the practice field and start preparations for the 2022 season. Go Blue!” 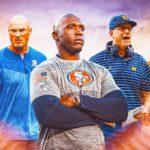 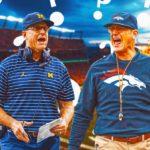 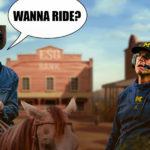 Across seven seasons as the Michigan head coach, Harbaugh has amassed a 61-24 record, though he’s just 1-5 in bowl games. He had his best season yet with the Wolverines in 2021, when their defense improved to a Top-10 unit after struggling in 2020. The Wolverines finished the year 12-2 but were taken down by Georgia in the CFP Semi-final, 34-11.

Harbaugh was named the 2021 AP Coach of the Year after helping lead Michigan’s resurgence back to the upper-echelons of college football, and he’s being rewarded for his efforts with an improved contract. Despite the heavy links to the NFL, Harbaugh will remain in Ann Arbor for the foreseeable future.