There are countless uncomfortable people in South Bend following a massive upset loss for the Notre Dame Fighting Irish to unranked Marshall Thundering Herd right in front of Notre Dame football home fans. Coming off a loss in Week 1 to the no. 2 Ohio State Buckeyes on the road, Notre Dame football head coach Marcus Freeman was expecting to finally get his first win with the team Saturday, but that simply did not turn out to be the case.

Earlier today, Marcus Freeman: “There’s no better place in this country to get our first win of this new era than here at Notre Stadium.”

That did not happen

Instead, Marcus Freeman took another loss, as the Fighting Irish fell to Marshall, 26-23. It was never going to be easy for Freeman to face the media after such a humiliating loss at home, but he was at least honest and sounded humbled about the defeat.

“It’s never easy to come in here after a loss, no matter who it’s to,” Freeman said in his postgame news conference. “It’s disappointing. We didn’t execute, and it comes down to execution.”

Notre Dame, which slipped from no. 2 to no. 8 after the loss to the Buckeyes, had consistent trouble moving the chains against the Thundering Herd. The Fighting Irish were even outgained by Marshall, 364-351. And as Marcus Freeman pointed out, failing to execute on numerous occasions burned Notre Dame’s hopes of avoiding an embarrassing loss. The Fighting Irish gave the ball away three times — all on interceptions — while not forcing Marshall to commit at least a turnover.

At this point, Marcus Freeman’s hopes of delivering the Fighting Irish to the College Football Playoff are virtually dim.

Up ahead for Notre Dame is a clash with another unranked program in the California Golden Bears at home on Sep. 17. 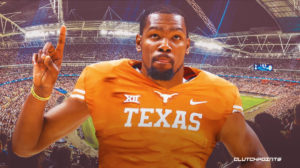