Former NBA star Matt Barnes is happy that the league took action over the workplace scandal involving Phoenix Suns owner Robert Sarver, but he believes Adam Silver and co. could have done more to punish him.

Sarver has been suspended for one year and fined $10 million after a thorough NBA investigation found out all sorts of issues with regards to his previous remarks and conducts. The league also needs him to “complete training program focused on respect and appropriate workplace conduct.”

In a lengthy statement released by the NBA, they cited some key findings of the independent investigation, including the use of  the “N-word” by Sarver at least five times on different occasions. The report also noted how Sarver “engaged in instances of inequitable conduct toward female employees” and “made many sex-related comments in the workplace.” Furthermore, Sarver was said to demean and treat employees harshly by “yelling and cursing at them.”

After hearing the result of the investigation, Barnes had an impassioned reaction while speaking with SiriusXM NBA Radio. He emphasized that “there’s no place for hate” in the NBA and racist actions like what Sarver did shouldn’t be tolerated. With that said, he thought the league could have given a harsher punishment to set a precedent.

“I think Robert Sarver was a perfect candidate to get kicked out of the NBA, and I’m sure I’m not the only one that feels that way. Unfortunately, the NBA decided not to,” Barnes said.

For what it’s worth, while Matt Barnes wanted the heaviest punishment, Robert Sarver felt that what the league did to him was already “too harsh.” The Suns owner was said to be difficult in the process and couldn’t accept the league’s decision.

It remains to be seen what happens next for the Suns amid the scandal, but hopefully the issue gets resolved and won’t be a major distraction once they start a new campaign. 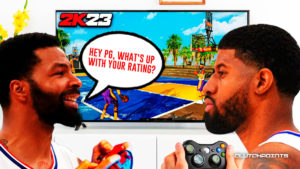