After losing in six games to the Utah Jazz in the first round of the playoffs, the Oklahoma City Thunder face numerous questions. Despite forming a Big 3 with Russell Westbrook, Paul George, and Carmelo Anthony, they could not meet their expectations during the 2017-18 NBA season.

As Anthony has a player option for the 2018-19 season, George is set to become an unrestricted free agent. According to Royce Young of ESPN, Russell Westbrook believes George ‘definitely wants to be here’ in Oklahoma City:

Russell Westbrook on how this free agency process is different with Paul George than it was with Kevin Durant: pic.twitter.com/igBaJ6D5PV

Although there is mutual respect between the two All-Star players, it is difficult to gauge George’s interest in re-signing with the Thunder, especially after an early playoff exit. Prior to being traded to the Thunder and throughout the season, the 27-year-old was consistently linked with his hometown team, the Los Angeles Lakers. 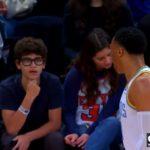 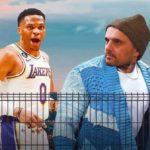 Under President of Basketball Operations Magic Johnson and general manager Rob Pelinka, it is no secret the Lakers have created the necessary cap space for two max contract players. Along with a young and competitive core established, the Lakers are eyeing George and LeBron James, who nearly became teammates with the Cleveland Cavaliers.

With two months before the start of free agency, George is in the prime years of his career and will be looking to win championships. Although Westbrook is confident in George ultimately re-signing, the Lakers are considered a threat as they look to speed up the rebuilding process with the five-time All-Star from Palmdale, CA.