Trevor Lawrence and the Jacksonville Jaguars pulled off a stunning win on a Sunday full of them, defeating Matt Ryan and the Indianapolis Colts to the tune of a 24-0 score at home. The Jags actually won a game first before the Colts, who entered the 2022 NFL season as the favorites to win the AFC South title.

Lawrence can credit the Colts’ lack of pressure for the success he had in Week 2. According to ESPN Stats & Info (h/t Michael DiRocco of ESPN), “the Colts defense pressured Jaguars QB Trevor Lawrence on just 3 of his 30 total dropbacks (10%), the lowest pressure rate Lawrence has faced in his career.”

The former Clemson Tigers star quarterback finished the game with 235 passing yards and two touchdowns with zero interceptions, while nearly completing all his pass attempts, going 25 of 30 from under center. The Colts’ soft pressure explains a lot of why Trevor Lawrence managed to put up the best game of his career in the NFL, so far.

However, this could also be another sign that Trevor Lawrence is truly progressing toward the massive potential he radiated before the Jaguars took him as the first-overall pick in the 2021 NFL Draft. His performance in the Colts game also was in stark contrast to his showing in Week 1’s loss to the Washington Commanders in which he went 24 of 42 for 275 passing yards and a touchdown and interception.

Trevor Lawrence can’t expect the same lackadaisical attitude on defense from the Los Angeles Chargers in Week 3, though, especially with the Bolts featuring a pair of scary linebackers in Joey Bosa and Khalil Mack. 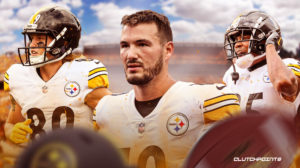