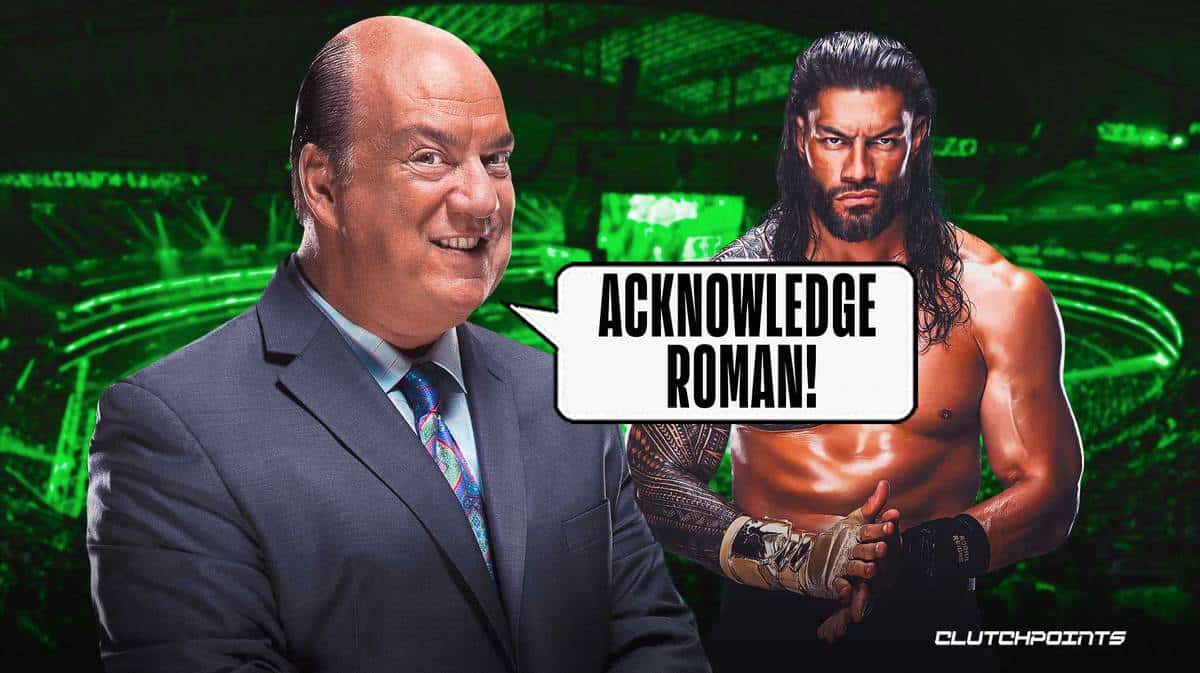 As you may or may not have noticed, Paul Heyman has been curiously absent from WWE television since he suffered a slam from Brock Lesnar at when things broke down outside the ring during the main event of SummerSlam. Granted, he has made a few verbal cameos, including an off-camera promo at the start of NXT’s Heatwave that would make any long-time fan of ECW proud, but outside of archival footage, the “Wiseman” has been absent at every turn, presumably recovering from the takedown at the hands of his former ward.

Has Paul E. been missed? Totally, Reigns has been taking hits – literally – from Drew McIntyre for weeks now that could have been strategized around with the keen mind of Heyman, and it’s hard to imagine the former ECW promoter allowing Jey Uso and Sammi Zayn to continue their spats without coming down on the situation one way or the other.

While his in-ring managerial abilities haven’t been needed, that will quickly change at Clash at the Castle, when Reigns will be tasked with besting McIntyre in the ring in front of his home crowd on his own home island.

Fortunately, Heyman made his presence known during the go-home edition of SmackDown before the big bout in Cardiff, producing not one but two video packages for the show in order to hype up The Bloodline members, authentic and honorary, and get a little extra acknowledgment from the WWE Universe for just how unprecedented The Tribal Chief’s reign has been in the annals of WWE history.

Will it be enough to help Reigns secure the win? Maybe yes, maybe no; fans don’t even technically know if Heyman will be at Clash at the Castle, so who knows, maybe all of this speculation is for not, but if he can’t make it on a cross-Atlantic flight, at least he delivered Reigns one heck of a hype speech to get appreciation for his performer.

Paul Heyman left no chance for the WWE Universe to forget about Roman Reigns.

“It began during unprecedented times. It became an unparalleled run of dominance. On August 30th, 2020, Roman Reigns regained the WWE Universal Championship at WWE Payback. For the past two years, over 23 title defenses against 14 world-class Superstars, Roman Reigns has smashed all competition and claimed his rightful place as the head of the table. A night we celebrate and indeed acknowledge the historic two-year title reign of the Tribal Chief, Roman Reigns.”

“Over the past two years, Roman Reigns has been the main event. 16 times Roman Reigns has main evented the biggest shows of the year, from the Royal Rumble to Crown Jewel, from Survivor Series to SummerSlam to the grandest stage of all, WrestleMania, 16 times against champions, legends, and Hall of Famers, men like Edge, Big E, Goldberg, John Cena, and Brock Lesnar. And 16 times, Roman Reigns has emerged victorious. Tonight we celebrate and indeed acknowledge the historic two-year title reign of Roman Reigns.”

“During his historic 733 days as champion, Roman Reigns has called SmackDown home. Seven spectacular title defenses against the toughest Superstars in the world today, the Tribal Chief has smashed them all. Kevin Owens, Finn Balor, Rey Mysterio, Riddle; all came to the Island of Relevance on a quest for greatness and only to have their hopes dashed and bodies smashed by the Tribal Chief.”

“Tonight, we acknowledge the historic title reign of Roman Reigns.”

“Throughout this epic reign, Roman Reigns has successfully defended his championship in some of the most brutal and unforgiving matches in the history of WWE; inside a steel cage, Extreme Rules, Tables, Ladders, and Chairs, Hell in a Cell, Last Man Standing. Through it all, the Tribal Chief has survived vicious matches only to come out stronger on the other side. Tonight, we celebrate and indeed acknowledge the two-year title reign of Roman Reigns.”

“Bruno Sammartino, Bob Backlund, Pedro Morales, Hulk Hogan; these legends lay claim to the longest reigns as WWE Champion. After 733 days of dominance, they are joined by the longest-running champion of the modern era, the Head of the Table, the Tribal Chief, the first ever Undisputed WWE Universal Heavyweight Champion, Roman Reigns.”

Goodness, whether you like Reigns and want to see him keep the belts until the spring of 2023 to have a match with The Rock at WrestleMania 39, or you want nothing more than to see McIntyre hoist up the straps in his home kingdom in the ultimate star-making performance, you have to acknowledge one simple fact: WWE made Roman Reigns into a true superstar over the past two years, and this reign will be remembered for a very long time.