It’s that time of the year again when a mere appearance by a certain player at a minicamp could turn heads. That’s the case this Tuesday for San Francisco 49ers star wide receiver Deebo Samuel, whose presence in the Niners’ minicamp today is expected amid a trade request.

Via Ian Rapoport of the NFL Network:

It has been a long road for the #49ers and Deebo Samuel. But his appearance at minicamp is noteworthy.

This comes after 49ers general manager John Lynch reiterated recently that the team has no desire of any level to let go of Samuel in a trade.

At the center of the Samuel situation is his current contract which is about to expire at the end of the 2022 NFL season. On Samuel’s part, it’s clear that he is looking for a lucrative extension, though, the 49ers have yet to offer him one. For the 49ers, they know what kind of value Samuel could bring to the table after the wideout put up incredible numbers in the 2021 NFL season.

Samuel led the 49ers in the 2021 NFL campaign with 1,405 receiving yards to go with six touchdowns on 77 receptions and 121 targets. Outside of being the top weapon downfield in San Francisco’s passing attack, Samuel also regularly moonlighted as a threat out of the backfield, having posted 365 rushing yards and a team-best eight rushing touchdowns on just 59 carries.

In any case, Samuel would be a tremendous asset for whichever team he’d suit up for by Week 1 of the upcoming season. 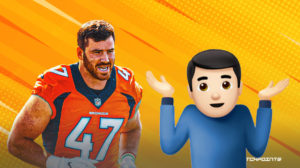 JUST IN: 3 best trade targets for the Broncos to round out their 2022 roster
Related Topics49ersDeebo Samuel