Is there any quarterback in NFL history similar to Patrick Mahomes?

It’s easy to forget about Kansas City Chiefs quarterback Patrick Mahomes with so many great quarterbacks like Lamar Jackson and Russell Wilson this year.

Mahomes just threw over 4,000 passing yards and 26 touchdowns to only 5 interceptions during a season where he dealt with multiple injuries, including two games missed with a dislocated knee cap.

Plus, his Chiefs are the No. 2 seeded team in the AFC Playoffs. They get a home playoff game after a bye thanks to their dominate quarterback.

Still, it is hard to forget how great Mahomes is. It is even harder finding a proper comparison.

So who are some players similar to the Chiefs 24-year-old signal caller?

Last year, Mahomes joined Drew Brees, Peyton Manning, Ben Roethlisberger, Matt Stafford, Dan Marino, Tom Brady and Drew Brees as the only passers to surpass 5,000 yards. Brees is the only one in that group to do it multiple times (five). Marino was the first youngest player to do it (23).

Patrick Mahomes wasn’t too far off doing it in his second season. Stafford was close too, hitting the mark in 2011 at 23 during his third season. The Lions QB came close to joining the club again the next season. However, Mahomes threw five less interceptions than Marino or Stafford in their 5k passing seasons. Marino also never broke 100 yards rushing in a season like Mahomes has twice. Stafford has done that three times in 10 seasons.

Otherwise, most of the other guys did it deeper in their career. Tony Romo, Kirk Cousins and Eli Manning have also come close to this club but have not made it.Mahomes is also elite in that group because he threw 50 touchdowns along with all those yards. Manning is the only other guy to do that.

What really separates Mahomes from the rest of the 5,000 passing yards club, like Manning and Brady, is his ability to run. Well many of those guys can scramble, or create in the pocket, they do not have the same size and speed to pose a threat as a runner.

The same could be said for Steve McNair, Steve Young, Donovan McNabb, DaunteCulpepper, Michael Vick, Randall Cunningham or any other quarterback you think of for running. Sure, those guys own Mahomes in rushing yards and touchdowns, but Pat beat them majorly in passing last season. Maybe it is a different league but Mahomes is a different bread.

Mahomes isn’t really a true running quarterback. He is more of a mobile QB with a big arm. He relies on the threat of his arm to open opportunities to run and not his running ability to open up passing.

That makes him closer to Warren Moon. Moon, like Mahomes, could run but he was better with his arm. Moon passed 4,000 passing yards four times in his career despite his career having an asterisk on it since he had so much time in the CFL.

However, Moon never came close to the 50 touchdowns like Patrick Mahomes. Moon also only completed more than 64 percent of his passes once. Patrick completed 66 percent of his throws twice in his three seasons.

Patrick Mahomes also separates himself from the pack with his early success. The Chiefs QB is 23-7 as a starter. Moon finished his career with about a .500 winning percentage in over 200 games. It is an apple to oranges comparison, but it took Moon three seasons before he had a winning season.

Yet Mahomeswon MVP in only his second season. He had the Chiefs looking unstoppable last season. His starts are down this year, as he threw 1,000 less yards and half the touchdowns, but his team is still in the playoffs. Mahomes also threw way less interceptions in his second year as the starter. All this coming after he sat out three games nursing an injury.

You would have to go back to Marino to find a player with the kind of success Mahomes is having this early. You could make a case for a young Ben Roethlisberger in terms of winning, but it took Big Ben four seasons to throw more than 30 touchdown passes.

Russell Wilson had success early in his career too. However, Mahomes is bigger and takes a lot less sacks than Wilson. Wilson has also played predominately in a run offense so his passing numbers do not really compare well to Mahomes either.

Of course, there is Lamar Jackson who has his team at the top of the AFC, and is most likely headed to an MVP in only his second season. However, Jackson is in his own unique group, as he set the record for rushing yards for a QB. Jackson is completing over 66 percent of his passes with over 30 touchdowns and single-digit interceptions.

Jackson is also like Mahomes in that they both slid down their draft boards. They both had to get the torch passed to them by an incumbent as well. Alex Smith started Mahomes‘ first season in the league while Jackson watched Joe Flacco for half the year.

Speaking of draft slides, Aaron Rodgers is another one who knows about waiting in the green room as well as inheriting a team. He slid to the 20s in his draft and he had to inherit the team from Brett Favre. Nonetheless, the Chiefs traded up and gave up picks to draft Mahomes at No. 10 overall which put him on an instant winner.

When it comes to the eye test, you could probably compare him to either of those guys. Rodgers is infamous for his deep ball with the flick of a wrist. He can also takeover a game. Rodgers has only thrown double-digit interceptions twice in his 14 seasons. Rodgers also bests Mahomes in rushing yards. Yet, Rodgers has not had 5,000 passing yards or 50 touchdowns like Mahomes last year. He has come close. Rodgers was also older than Mahomes when he took over.

Favre on the other hand was a master at improvising. Throwing on the run and creating. Still, Mahomes has never thrown more than 12 interceptions. Over nearly a twenty year career, Favre did that once. Not to mention, Patrick Mahomes is also unique for really practicing no-look, jumping throws, side arms and other highlights.

Pat Mahomes with the wicked sidearm 😮

Matt Ryan is also a modern gunslinging QB who comes to mind. Ryan has thrown over 4,000 yards and completed over 60 percent of his passes the last nine seasons. Yet, Ryan has never thrown over 40 touchdowns. His numbers also took a sizable jump in his fourth season when the Falcons drafted Julio Jones. Pat Mahomes‘ No. 1 receiver Tyreek Hill is great but he is no Julio Jones and Mahomes could still put up those big numbers.

Happy father’s day to the best pops out there!

Besides 5,000 passing yards and 50 passing touchdowns in one season, Mahomes also shares something with Peyton Manning. That is a pops who is a professional athlete. Some have even compared him to Steph Curry for having a pro athlete dad, transcending the game putting up godly numbers. 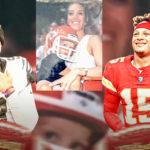 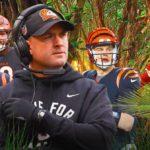 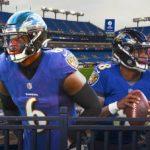 Mahomes‘ father was a professional baseball player with 11 seasons. It’s not the same as the Mannings, but it means he had guidance and genetics. In fact, it probably makes Mahomes a better athlete than either of the Mannings. Mahomes is also in the 80th percentile for three-cone drills at the NFL Combine and the 90th percentile for 20-yard shuttle which again proves his athleticism.

There is actually an entire feature about the legend of Mahomes playing basketball, football and baseball at a high-level his entire life.

In High School, Mahomes was a baseball phenom. He got drafted and offered to play in the MLB but he loved football more. That puts him somewhat in a group with Kyler Murray and Russell Wislon as guys who got drafted by the MLB. Murray and Mahomes both came up under current Cardinals head coach Kliff Kingsbury as well.

Murray is actually faster and a better runner. Mahomes’ athletic profile is actually closer to Teddy Bridgewater or Drew Lock. Yet neither of those guys have the same arm as Mahomes. Not to mention, Murray only threw two less interceptions this year than Mahomes last season, but Murray hasn’t thrown half the touchdowns.

Moreover, Mahomes is already on his way to being as visible as the Mannings or Tom Brady. He was just on the cover of Madden and has been in commercials. It wasn’t until recently we really saw Brady get the visibility Mahomes is receiving.

No there is no quarterback like Kansas City Chiefs star Patrick Mahomes. That is the short answer.

The long answer is that there is no player with the flash, arm-strength, accuracy, dual-threat ability, team success and story that Mahomes brings in only his second year as a starter in the NFL.

It does not matter what class you put him, there is no QB in history like Patrick Mahomes. His athletic pedigree, arm-strength, highlights, team success, mobility and story make him one of a kind. We can’t forget the froggish-voice or athlete girlfriend either as part of his story.

The point is, Mahomes is in a category by himself. At 24, and only his second year starting, Mahomes still gets to play his best football too. Guys like Murray or Jackson might be the future of the league, but even they are no Mahomes yet.

Look at stats, look at tape or look at impact and you will not find a quarterback like Patrick Mahomes.