Alabama football’s 2021 season didn’t end the way they wanted it to. The Crimson Tide won 13 games, the SEC title and made it to the national championship game, where they were defeated by the Georgia Bulldogs. You know, just your casual rebuilding year. I’m kidding, Nick Saban! In all seriousness, last year’s title game loss could serve as some serious motivation for Saban’s squad.

After all, it’s not often that they lose in the national championship game. Well, Saban is using that loss to fuel his team in a unique way: by displaying the CFP runner-up trophy at the Alabama football complex. And it seems to be working too. Crimson Tide offensive lineman Emil Ekiyor has the mindset that Saban is looking for. Here’s what Keiyor said, per Michael Casagrande of AL.com.

“It’s a participation trophy,” he said bluntly. “You made it but you didn’t do anything. You didn’t win. I wouldn’t say we fully turned the page but there’s always going to be something that externally motivates us. Yeah, that’s all I’ve got to say.”

They played Georgia football, but that’s about all the record will show they did, given that they failed to reach their ultimate goal. Now, every player on Alabama football’s roster gets a daily reminder that they didn’t win the natty last year every day they walk into the building?

If that doesn’t make you want to run through a wall and shout Roll Tide while you’re doing it, nothing will. Watch out for Nick Saban’s Alabama Crimson Tide. 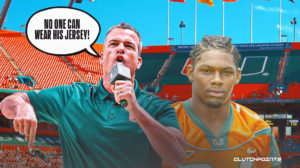