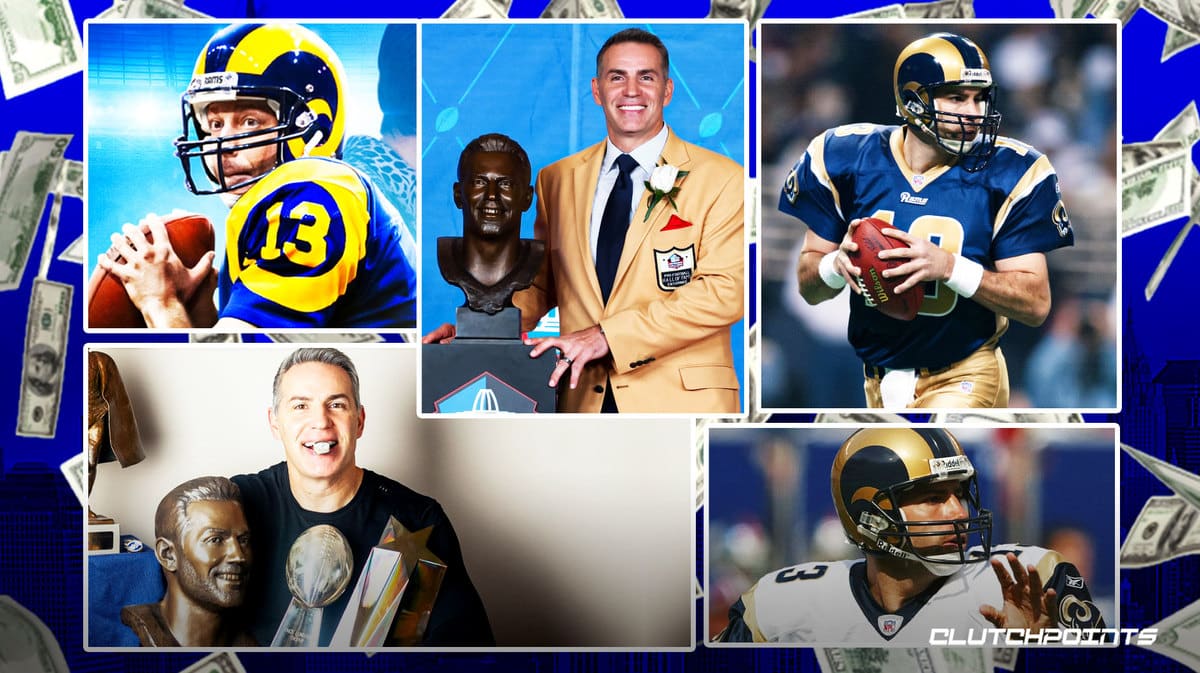 Kurt Warner is a former quarterback who played for 12 seasons in the NFL. He is considered to be the greatest undrafted player and his journey is regarded as one of the greatest stories in NFL history. In this article, we will take a deep dive into his journey and take a look at Kurt Warner’s net worth in 2022. Kurt Warner’s net worth in 2022 is valued at $30 million. This is agreed upon by multiple reputable sources such as Celebrity Net Worth.

Before we take a look at the success of the former NFL and Super Bowl MVP, it is right to tackle his humble beginnings.

Kurt Eugene Warner was born on June 22, 1971, in Burlington, Iowa. He played high school football at Regis High School in Cedar Rapids. After graduating in 1989, he attended the University of Northern Iowa.

He was the third-string quarterback for his first three years. When he was named the starting quarterback, Warner was awarded the Gateway Conference’s Offensive Player of the Year and was included in the First-team all-conference.

Following his graduation in 1993, Kurt Warner applied for the 1994 NFL Draft. Unfortunately, he went undrafted. He was then invited for a tryout for the Green Bay Packers training camp in 1994. However, Warner was competing for a quarterback spot against the likes of Brett Favre, Mark Brunell, and former Heisman Trophy winner Ty Detmer.

Due to a stacked lineup, he was cut before the regular season began.

After getting cut, Warner worked at a Hy-Vee Grocery Store in Cedar Falls where he stocked shelves for $5.50 an hour. Aside from that, he returned to his alma mater, the University of Northern Iowa, and worked as a graduate assistant coach while keeping his NFL dreams alive.

NFL teams still were not giving him a chance, so Kurt Warner decided to join the Arena Football League and sign with the Iowa Barnstormers in 1995.

He played in the AFL for three seasons and was named to the AFL’s First-team All-Arena in 1996 and 1997. He also led the Iowa Barnstormers to the ArenaBowl in his final two seasons. During his three-year stint, Warner passed for 10,465 yards and made 183 passing touchdowns.

Despite only playing three years, Warner was ranked 12th out of the 20 Best Arena Football Players of all time.

In December 1997, at the end of the St. Louis Rams season, Kurt Warner signed a futures contract with the Rams. In February 1998, he was assigned to play for NFL Europe where he joined the Amsterdam Admirals.

Warner led the league in touchdowns and passing yards. When he returned to the United States to re-join the Rams, he became the third-string quarterback behind Tony Banks and Steve Bono. Warner ended the 1998 season with only one game played for the Rams wherein he completed 4 passes for 39 yards.

During the 1999 free agency, Kurt Warner was selected as one of the five unprotected players in the 1999 NFL Expansion Draft. Fortunately, he was not selected and the Rams let Steve Bono leave in free agency and they traded away Tony Banks.

Warner signed a one-year deal with the Rams worth $750,000. The Rams also signed Trent Green to be their starting quarterback for the 1999 season, making Warner second in the position depth chart.

Unfortunately, Trent Green suffered a season-ending ACL injury during a preseason game. Rams coach Dick Vermeil then appointed Kurt Warner as the new starting quarterback. Despite not seeing him work with the first-string offense, Vermeil said “We will rally around Kurt Warner, and we’ll play good football.”

The Rams, behind offensive coordinator Mike Martz, produced a high-powered offense for the 1999 season — and was nicknamed “The Greatest Show on the Turf”. The Rams finished the regular season with 13 wins and 3 losses.

In Kurt Warner’s full season as a starter, he completed 325 passes for 4,353 yards and a league-leading 41 passing touchdowns with a completion rate of 65.1%. Due to his performance, he was named 1999 NFL MVP as he led the Rams to their first playoff berth since 1989 and their first division title since 1985.

In the playoffs, the Rams cruised past the Minnesota Vikings and the Tampa Bay Buccaneers to book a ticket to Super Bowl XXXIV to face the Tennessee Titans. Warner led the Rams to victory as he threw for 2 touchdowns and a Super Bowl record of 414 passing yards, including a 73-yard touchdown. He also set the Super Bowl record with 45 pass attempts without a single interception.

Due to his incredible performance, Kurt Warner was named the Super Bowl MVP — making him the most recent player to win both the NFL MVP and Super Bowl MVP in one season. All of this did help in adding to Kurt Warner’s net worth in 2022.

The following year, Kurt Warner signed a seven-year $46.9 million contract, including an $11.5 million signing bonus, with the St. Louis Rams. Despite a good start in the season, Warner, unfortunately, broke his hand and missed the middle of the season, with Trent Green filling in for him. However, the Rams only won 10 games and lost in the wild card round to the New Orleans Saints.

In the 2001 season, Kurt Warner was back to his MVP form. He finished the year with league-leading stats of 375 passes completed, 68.7% completion rate, 4,830 passing yards, and 36 touchdowns. He led the Rams to a 14-2 record in the regular season and cruised past the playoff once again, beating the Green Bay Packers and the Philadelphia Eagles en route to the Super Bowl.

In Super Bowl XXXVI, the Rams faced the New England Patriots. Despite 365 passing yards and one passing and rushing touchdowns for Warner, St. Louis failed to prevail as they lost the match 20-17.

Kurt Warner only played 7 games in the 2002 season after he broke a finger in his throwing hand during the Rams’ fourth game of the year. On top of that, he played poorly as he posted a 67.4 rating, well below his 103.0 career passer rating.

The following year, Warner was taken out of the starting lineup for good after he fumbled six times in the Rams’ opening day game against the New York Giants. On June 1, 2004, the St. Louis Rams released Kurt Warner.

A couple of days after his release, Warner signed a one-year $3 million deal with the New York Giants, with a second-year player option worth $6 million. He then started the 2004 season as the starting quarterback where they won five of the first seven games. After a two-game losing streak, Warner was replaced in the starting lineup by the highly-touted rookie Eli Manning.

The Giants only won 1 game and lost 6 under Manning, finishing 6-10 overall. Warner then chose to become a free agent and void his player option with the New York Giants.

For the 2005 season, Kurt Warner signed a one-year $4 million deal with the Arizona Cardinals and he was named the starting quarterback. Unfortunately, Warner suffered a groin injury at the start of the season and he partially tore his MCL during week 15 of the regular season.

Despite that, Warner signed an extension with the Cardinals worth $18 million for three years.

Kurt Warner finished his career with totals of 2,666 passes completed, a 65.5 completion rate, 32,344 passing yards, and 208 passing touchdowns. Despite his retirement, Warner admitted that he thought about making a comeback.

According to Spotrac, Kurt Warner earned around $62,773,000 throughout his 12-year NFL career.

After his playing career, Warner served as a broadcaster and analyst for the AFL and the NFL. He was named the Iowa Barnstormers broadcaster for the 2011 AFL season. He also joined the NFL Network as an analyst in 2010 where he was regularly seen on NFL Total Access. In August 2010, he served as the color analyst for Fox Sports’ NFL coverage in the 2010 season.

Kurt Warner also made television appearances for shows like The Biggest Loser, The Suite Life on Deck, The Jay Leno Show, and Dancing with the Stars.

On December 25, 2021, a theatrical film about Kurt Warner’s journey was released. It was titled “American Underdog: The Kurt Warner Story” and he was played by Shazam! actor Zachary Levi. The film was met with generally favorable reviews.

As for his endorsements, Kurt Warner signed a multi-year post-retirement endorsement deal with the Nutrilite Brand. Amway North America then announced to donate $50,000 to Kurt Warner’s First Things First Foundation.

Kurt Warner’s story is one of the most inspirational and motivational stories in sports history. His dedication and mentality to pursue his dreams give hope to anyone who learns about his journey.

With that being said, were you surprised with Kurt Warner’s net worth in 2022?