Mike Woodson, assistant coach for the Los Angeles Clippers, was asked recently why he punched center Deandre Jordan on the chin, during a timeout.

Woodson told TMZ that he checked Jordan in the chin to get his attention.

While it’s certainly an unusual method used to motivate a player, he maintained that, while Jordan could have checked him back, he would not let him.

He can be seen here telling Jordan, ‘lets go, lets go to work’, before punching him in the chin. 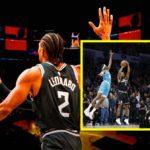 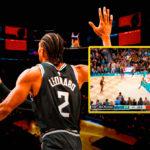