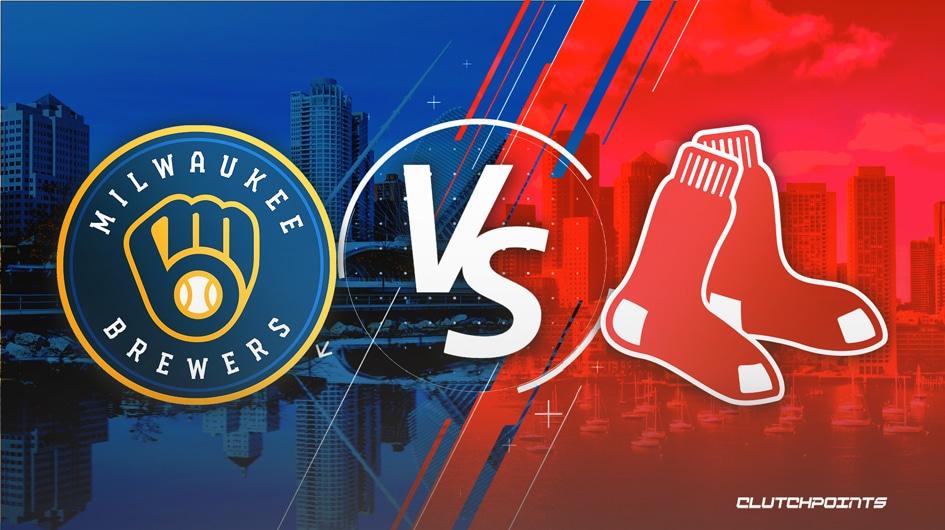 The Milwaukee Brewers are looking for the sweep as they face the reeling Boston Red Sox on Sunday afternoon at Fenway Park. It’s time to continue our MLB odds coverage with a Brewers-Red Sox prediction and pick.

The Brewers defeated the Red Sox 9-4 on Saturday. Milwaukee started things fast in the first inning when Rowdy Tellez blooped an RBI single to shallow left. Then, Omar Narvaez blasted a solo shot to deep right-center field, making it 2-0 Brewers. It was 2-1 Brewers in the fifth when Hunter Renfroe approached the plate. Next, Renfroe slammed a two-run shot to left-center field. It was the 18th home run of the season for Renfroe, making it 4-1 Brewers. Boston roared back later in the game to cut the deficit to 5-4. Ultimately, Milwaukee padded their lead with runs in the eighth and ninth.

The Brewers will roll with Andy Ashby on the mound today. Ashby is 2-8 with a 4.38 ERA. Recently, he was sharp, going seven innings while allowing two earned runs on five hits. Ashby has not had the best July, going 1-3 with a 4.71 ERA over five starts. Significantly, he is 1-6 with a 5.15 ERA in 13 appearances on the road.

Here are the Brewers-Red Sox MLB odds, courtesy of FanDuel.

The Brewers are 7-3 over 10 games, and pitching has become a significant reason. Also, their hitting has improved. Getting Renfroe back in the lineup has been a boost. Additionally, Christian Yelich is doing well lately, batting .375 with four RBIs and seven runs. The Brew Crew are extending their lead over the St. Louis Cardinals in the NL Central and starting to heat up.

The Brewers rank 18th in batting average, eighth in on-base percentage, fifth in runs, fourth in home runs, and seventh in slugging percentage. The offense has boosted the pitching recently and helped make games easier. Likewise, the pitching continues to dominate. Ashby is the fifth starter in the rotation and has also pitched out of the bullpen this season. It is his job to keep the Red Sox hitters at bay and prevent a collapse in the game. Likewise, Ashby must pitch better than his recent performances to garner much of a difference.

The Brewers will cover the spread if their hitters continue to pound the baseball. Likewise, their hitters must give Ashby the chance to work with a cushion. Ashby must last at least five to six innings and limit the runs. Despite how bad Boston has played, are still a dangerous team.

The Red Sox are 7-19 in July and cannot wait for the month to end. The only team that has played worse than Boston are the Los Angeles Angels. Now, Boston must find a way to overcome its numerous injuries. It is a team that is playing without Michael Wacha, Rich Hill, Chris Sale, and James Paxton in the rotation. Also, they are without Kike Hernandez, Trevor Story, and Rafael Devers in the lineup. The Sox need someone to step up.

Despite the injuries, their offense still ranks well. The Red Sox are fifth in batting average, 13th in on-base percentage, 11th in runs, 18th in home runs, and ninth in slugging percentage. Unfortunately, the pitching has taken a toll, ranking 24th in earned runs average and 20th in batting average against. It has become a recurring issue for the Sox, as they fall behind early in games and cannot make the comeback despite a decent offense.

The Red Sox will cover the spread if they can get a good performance out of Winckowski. Likewise, their bullpen must do its job and keep the game close. The offense must put pressure on Ashby early, and prevent Milwaukee from building a lead.

Neither pitcher is good. However, the Brewers are rolling and the Red Sox are reeling. The 9.5 line for the over/under is tempting. Ultimately, picking the Brewers to cover is the smarter move based on how well they have played. The Brewers will win this game, covering the odds, and sweeping the Sox at Fenway.