This week’s chapter saw Marc and Steven discover more about their part in stopping Arthur Harrow’s plan to resurrect Ammit. But even if that’s the case, there are a lot of details to unpack from this Marvel series on Disney+ from his last appearance. Here is Moon Knight episode 5 ending explained to shed some light on what really happened with the Fish of Khonshu. 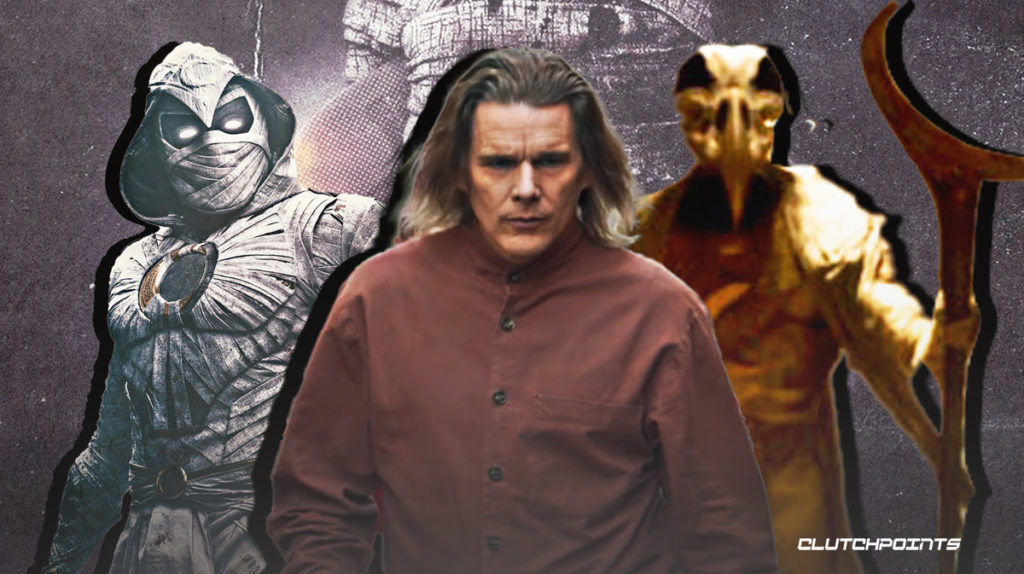 This week’s episode starts with a short flashback revolving around Marc’s mother. The scene then shifts to Harrow posing as a psychiatrist and talking to the mercenary about his recollection of Tawaret, who first appeared in episode four.

Marc then grabs a glass pyramid and threatens Harrow, only for the security to arrive and sedate him. As he screams, the scene returns to Marc and Steven talking to Tawaret, who then tells the pair that they’re actually dead. The goddess reveals that they’re about to enter the realm of the dead called Duat, which takes a form that can be easily recognized by the person dying. In this case, Marc suspects that the psychiatric ward’s setting leads to the conclusion that he has gone insane.

As he’s getting stressed by that fact, a door opens to reveal a wooden ship traversing the desert during nighttime. Tawaret then pulls out a pair of white hearts from Marc and Steven and places them on a balance to determine where they will end up. The goddess was surprised to discover that both their hearts aren’t balanced, a fact that will lead Duat to claim their souls. Tawaret instructs the two to balance their hearts before that happens.

As they both return to the ward, Marc and Steven see certain points of their lives through the glass doors in the hallway. They enter a different door, only to discover a cafeteria filled with dead bodies. Marc recognizes them as the people he has killed as Khonshu’s avatar.

At the same time, Steven inspects a balance containing their hearts, which is starting to become stable. A child then appears and they both chase him. Marc gets locked out while Steven sees a flashback involving the former’s family. He follows the younger Marc with his brother entering a cave in the woods as it starts raining. The usually calm Steven starts to panic as the water inside the cave starts to rise. He then witnesses Marc’s brother drown.

Meanwhile, Marc enters a different door and finds Steven inside reliving the funeral of his brother. The pair sees the young Marc being admonished by his mother and blamed for his brother’s death. What followed are several points in Marc’s childhood where he felt abandoned by his mother, and even verbally abused by her.

Marc then pulls Steven from opening another door to keep his past from him. They both see their father begging a teenage Marc to stay because help is coming to his mother. They then struggle with each other as the two fall into another door. At this point, Marc admits his history as a mercenary and his part in the death of Layla’s father.

Both Marc and Steven enter an old temple. They both see a mortally-wounded Marc about to kill himself before Khonshu stopped him. The Egyptian god calls on him to be his avatar, which the mercenary accepts. As he does, the dying Marc is then transformed into Moon Knight to carry on his vengeance.

As the scales start to balance due to Marc and Steven discovering themselves, they implore Tawaret to help them release Khonshu. The goddess says that they have to complete the balancing of their hearts for that to happen. Steven then confronts Marc to show him what happened to him and his mother to achieve their goal.

Marc begins to become violent. As he starts to shout, the scene abruptly goes back to Harrow’s office. The psychiatrist starts to interrogate him and asks him to open up about his past. Marc complies and shows Steven what happened when he was a kid.

A scared Marc locked himself inside a room while his mother angrily demands entry. At this point, Steven discovers that he is a made-up personality. The pair then sees Marc’s mother get a belt and start physically punishing him with it.

Steven then gets mad with this discovery as Marc tries to justify his existence and why he had to create him because of his abusive history. Like in previous parts of the episode, the scene goes back to Harrow’s office. This time, though, the personality that appeared to Harrow is that of Steven’s.

Harrow offers to call Steven’s mother to prevent him from becoming violent. He takes the phone only to discover that his mother is truly dead, a fact Steven tried so hard to deny. A flashback is then shown of Marc standing outside of his house during his mother’s funeral. He breaks down in front of Marc as the revelation about his mother and her abusive upbringing came to light.

Marc confirms that his mother’s death was the starting point when Steven’s personality started to gain control of his body as a coping mechanism for his grief. Tawaret then tells both Marc and Steven that their hearts didn’t balance as the undead start to come aboard the ship for their souls.

Marc starts to fight these undead creatures while Steven does his best to help him. The former is then knocked out, which led the calmer personality to fight back as well. Unfortunately, Steven falls off the ship trying to save Marc. He becomes a solid block of sand as Marc tries his best to come back for him. At that point, Tawaret claims that the scales finally balance with their hearts on them.

A burst of light from the sun shines on Marc as a field comes out of nowhere, leading the episode to end on a vague cliffhanger.

Throughout the whole series, there has been a lot of mystery about how Marc and Steven came to be. In this particular episode of Moon Knight, Marvel has drawn back the curtains to reveal what happened to Marc and how his calmer personality was created.

As the episode progressed, viewers discovered that Marc’s mental health issues all stemmed from the death of his brother and how his mother blamed him for it. Her abusive approach to Marc throughout the years contributed to his fractured psyche. His broken mind drew Khonshu to him as a dying Marc Spector become his new avatar, just right before he played a part in the death of Layla’s father.

With Marc and Steven confronting their troubled past, the scales containing their hearts have finally balanced. This can propel the plot towards its ending with Khonshu being released, the Moon Knight suit coming back, and the eventual defeat of Harrow. JUST IN: Wild deepfake video of The Batman will make you wish it was real
Related TopicsEntertainmentmarvelMoon Knight