In 2019, the Golden State Warriors and the Minnesota Timberwolves made a trade regarding two of the top young players in the NBA. The Warriors traded D’Angelo Russell to the Timberwolves for Andrew Wiggins and a first-round pick. Now, a current head coach is voicing his displeasure regarding the trade all these years later.

Heavy.com’s Sean Deveney recently spoke with an anonymous head coach. During the conversation, the trade centered around Wiggins and Russell was discussed.

When looking back at the circumstances surrounding the trade, at the time, it made sense for both sides. Wiggins was looking for a fresh start and Russell was looking for a bigger role. Both players were able to get what they wanted with this deal between the Timberwolves and Warriors.

On the other side, Andrew Wiggins was in the middle of a subpar season. He averaged 18.1 points per game, 2.5 assists per game, and 4.8 rebounds per game.

Now, both players are playing at the top of their game. Last season, Wiggins played a pivotal role in the Warriors winning a championship. And at the moment, Russell looks to be an integral piece of the Timberwolves’ young core.

It is hard to argue that at the time of the trade, either side was “losing”. But looking back, the Warriors gained two massive pieces in Wiggins and Jonathan Kuminga. And with this deal, they could be dominant for the foreseeable future. 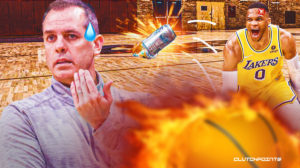