It looks like some NBA fans were not pleased with Draymond Green’s friendly tone towards Ja Morant after the NBA reportedly approved a Golden State Warriors-Memphis Grizzlies game on Christmas.

For those who missed it, the two have campaigned for a Christmas showdown after what seemed to be an intense Twitter beef. Green even seemingly mocked Morant and the Grizzlies at the time, saying he would invite them for dinner after they beat them in the game should the NBA approve it.

Instead of hyping the rivalry, though, Green surprisingly got out of character when he praised Morant and even invited him and the Grizzlies for dinner–this time looking more sincere.

That’s the power of your voice Young! Let’s goooo! Bring the fam to the crib for dinner after https://t.co/xs8GpKkQtE

Some fans expressed their disappointment with the friendly nature of Draymond Green’s response, prompting them to accuse the NBA stars of starting a “fake beef.” The said fans probably thought it could be the start of a real and intense rivalry where both teams would go for each others’ throats whenever they play, only to be slapped with the reality that it’s all just for show.

All this friendly shit is annoying, y’all gotta fight next time ur on the court

I’m believe in loving your neighbor, but don’t make up fake beefs, or pretend to have Steph’s back. It smells of disloyalty & dishonesty. I’m watching you carefully. We are loyal & will never be OPS for podcast ratings or money. We can’t be bought. Warriors fans r Faithful.Are u?

Given how some fans dream to see the old-school NBA when players really hate each other and get into physical fights, it’s not a surprise why others would want to have a “real” rivalry–something that’s really missing in the league for decades now.

Good lord as a warriors fan can we please trade him now! He’s inviting an opponent to his house for dinner on Christmas. Not even his own teammate. @warriors its tile Dubnation.

While it’s easy to see where such fans are coming from, what they may have failed to realize is that these players have relationships off the court. Not to mention that even though it has been going on for years, players have remained competitive and intense whenever they play other teams. 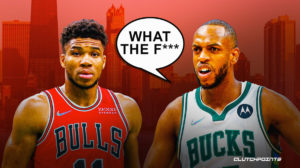