There’s no denying that during his heyday, JJ Redick was one of the most dangerous marksmen in the NBA. He knows a thing or two about shooting from distance, and we should put a lot of stock in what he thinks about Golden State Warriors star Stephen Curry and his greatness.

Redick recently guested on Draymond Green’s podcast as he compared Curry to the other great shooters in the history of the sport. Redick pointed out that much like himself, guys like Kyle Korver, Klay Thompson, Reggie Miller, and even Ray Allen relied heavily on catch-and-shoot triples. In his mind, this is what sets the Warriors superstar apart in that Steph can almost literally get any shot he wanted.

According to Redick, there’s only one player that comes to mind when he tries to find a comparison for the Warriors point guard, and that’s Portland Trail Blazers superstar Damian Lillard:

“The only guy that shoots it remotely like Steph — and I’m not saying one’s better than the other or that he’s that far behind Steph — is Dame,” Redick said. “Dame is the only guy to me, that in some way emulates what Steph does from the 3-point line.”

It’s a great podcast, I don’t know if you’ve heard of it but it’s really good and still going on during the NBA Finals 👍 pic.twitter.com/EcTqIxo85H

Draymond Green himself was in full agreement with Redick’s statements. Even he believes that Lillard is the only guy who could hold a candle against his Warriors teammate in terms of their insane range. 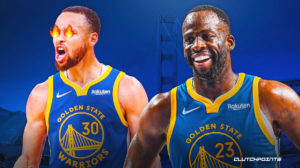