For Kansas City Chiefs quarterback Patrick Mahomes, the debate on the greatest NFL tight end ever is over. It’s Travis Kelce, and no ones comes close.

Mahomes made the bold declaration after he and Kelce paired up to power the Chiefs to a 30-27 victory over the Los Angeles Chargers in Week 11 on Sunday night. The Kansas City superstar QB threw three touchdown passes, all to his veteran tight end teammate.

Kelce finished the contest with 115 yards on six receptions, allowing him to surpass Rob Gronkowski for the most games with at least 100 receiving yards. The 33-year-old is also now second in 150-yard games, fifth in reception yards and sixth in reception touchdowns among all other TEs in the history of the game.

With Kelce’s incredible and consistent performance for the Chiefs and the numbers to back it up, Mahomes feels like his teammate has done enough to earn the GOAT TE label.

“He’s the greatest tight end of all time,” Mahomes said after Sunday’s victory, per Ari Meirov of PFF. 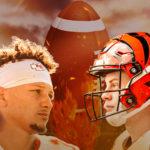 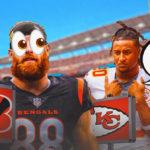 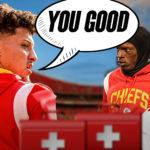 Sure enough, Travis Kelce has made his case for the GOAT TE debate. While Rob Gronkowski had been the ideal example of a TE for years, the Chiefs star has definitely proven himself to be mentioned among the game’s greats.

Interestingly, however, Patrick Mahomes might be forgetting another Chiefs legend in Tony Gonzalez. The Hall of Famer has been considered the gold standard of tight ends. No other TE has been as consistent and as dominant as he was in the position, so Mahomes might see some pushback from the Kansas City faithful with his statement.