‘No doubt in my mind’: Zach Wilson’s swagger shines through after leading Jets on game-winning drive against Steelers For a guy who hadn’t played yet this season, Zach Wilson brought quite a bit of swagger to the New York Jets in their 24-20 win against the Pittsburgh Steelers in Week 4 Sunday.

Most importantly, the 23-year-old backed up that swagger with the second fourth-quarter comeback of his young NFL career. In fact, Wilson oozed confidence after the Jets got the ball back with 3:42 to play and the team trailing by three points.

“Hundred percent, you know from the beginning I think there was no doubt in my mind (that the Jets would score),” Wilson said.

Wilson’s teammates shared a more colorful picture of how confident their quarterback was before the game-winning drive.

New York’s Michael Carter II intercepted a Kenny Pickett pass at the Jets 36 yard line to give Wilson and the offense a chance to win or tie the game. This was less than four minutes after Wilson connected with Corey Davis on a five-yard TD pass to cut the deficit to 20-17.

New York calmly worked the clock, ran the ball twice and Pittsburgh committed a holding penalty. Rookie running back Breece Hall capped the drive with a two-yard run, extending the ball over the goal line right before it was knocked out of his hand.

“I think it was the first time as an offense that we didn’t feel stagnant, didn’t feel timid,” Wilson said. “Everyone was playing fast. We were right on key with what the calls were. Just so much fun playing in those situations.”

Wilson completed 11 of 13 passes in the fourth quarter for 128 yards and a touchdown. On the two scoring drives, he completed several passes for third-down conversions. And he had a huge 22-yard completion to Davis on a fourth-and-two with 9:48 to play that set the Jets up at the Steelers 17, extending a drive that ended with a touchdown. 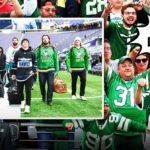 Wilson missed the first three games of the 2022 season after undergoing arthroscopic knee surgery on August 16. He sparked the Jets early in his first game back, catching a two-yard pass from wide receiver Braxton Berrios on a flea flicker early in the second quarter that put New York up 10-0.

After the touchdown Wilson delighted his teammates with a Griddy celebration.

THE CATCH.
THE GRIDDY.

The second-year pro was 18-36 for 252 yards, third most for him in the NFL. Zach Wilson was intercepted twice, including once on a pass that deflected off Conklin’s hands. He also rushed twice for 15 yards and used his mobility to escape numerous close calls on the pass rush. He was sacked only once behind New York’s patchwork offensive line.

Next up for Wilson and the 2-2 Jets is an AFC East matchup next Sunday against the 3-1 Miami Dolphins.