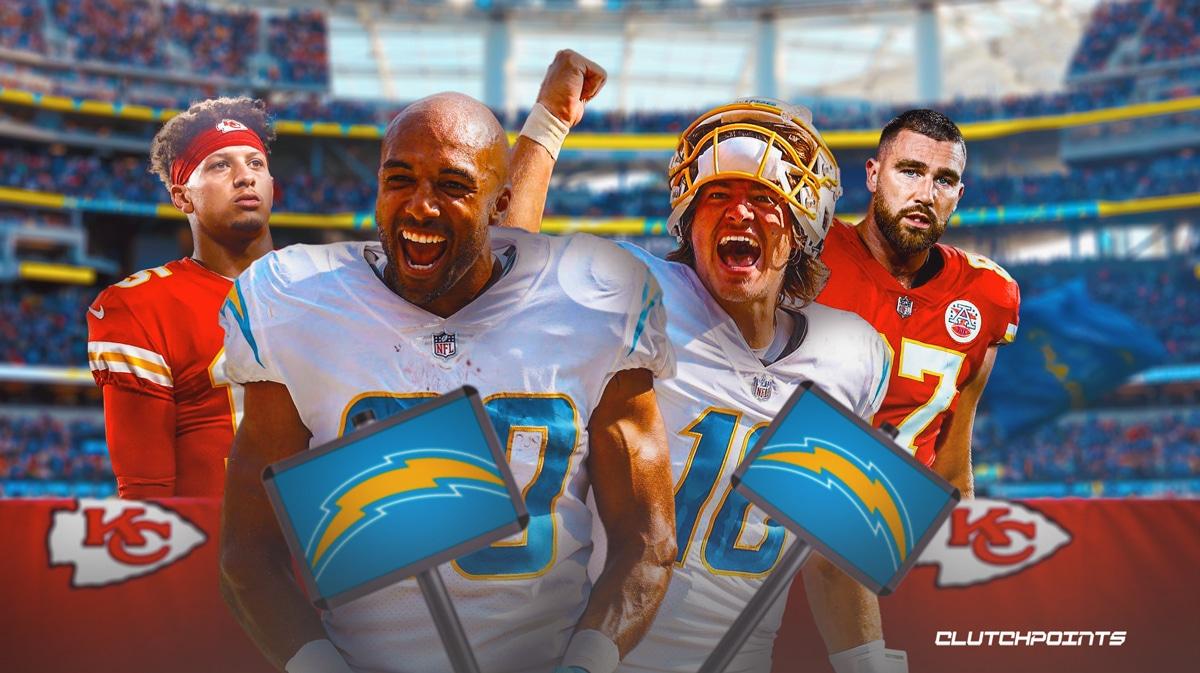 The Los Angeles Chargers Week 11 matchup with the Kansas City Chiefs is crucial if they want any shot at winning the AFC West this season. The Chargers are 5-4 and two games back of the Chiefs. They already lost to Kansas City on Justin Herbert’s late pick-six back in Week 2. So, if Los Angeles loses this game, they will essentially be four games back.

There was a ton of optimism that this could be the year the Chargers take over the division. They went out and signed All-Pro cornerback J.C. Jackson, who was a Pro Bowler with the New England Patriots. They also traded for one of the best linebackers of the last decade in Khalil Mack. But once again, injuries have crushed this Chargers team.

Jackson is done for the year after suffering a season-ending knee injury in Week 6. They have also been without Herbert’s top weapon, Keenan Allen, for basically the entire season. Fellow Pro Bowl wideout Mike Williams has also been out the last few weeks with an ankle injury. Recent reports have both receivers back at practice on Wednesday, which is a positive sign that maybe they return this week.

They will be needed too. The Chiefs offense has not taken the step backwards that many, myself included, expected, minus Tyreek Hill. In fact, they lead the NFL in scoring at 30 points per game. So, if the Chargers want to win this game, they are going to need to keep up.

All that said, let’s get to the 4 Chargers predictions for the game against the Chiefs.

Chargers running back Austin Ekeler had a rough start to the season. Over the first three weeks of the season, Ekeler rushed for just 80 yards combined on 33 carries with no touchdowns. That’s not good.

Since then, Ekeler leads all running backs with 10 touchdowns. With the injuries to the Chargers receivers, Ekeler has been the team’s leader pass catcher as well. He has already caught 67 passes this year for 420 yards. I would expect a heavy dosage of Ekeler both on the ground and through the air Sunday night as Los Angeles hopes to keep Patrick Mahomes on the sideline.

The Chiefs rush defense looked really good to start the year. But over the last few weeks, similar to last season, they have shown kinks in the armor. Look for Ekeler to be very busy and post over 100 total yards and score at least once.

It’s still not known whether or not Los Angeles will get either Allen or Williams back. The fact that they are practicing is a positive development, but is far from a lock that they suit up. Meanwhile, over the last few weeks Joshua Palmer has taken on the role as the leading receiver.

Palmer has averaged nine targets per game over the Chargers’ last four games. He has caught 23 of those and went over 100 yards receiving against the Falcons two weeks ago. It’s clear that he is the preferred option for Herbert without his key guys. I don’t know about you, but until I see Allen back on the field in an NFL game, I don’t believe he will play. Brandon Staley has been calling him day-to-day for over a month now. That’s month-to-month, bro.

Herbert is going to have to throw the ball quite a bit. So I believe Palmer will once again lead the team in targets, receptions and possibly yards.

2. Chiefs move the ball on the ground much better this time around

In their Week 2 matchup, Chiefs running back Clyde Edwards-Helaire rushed for 74 yards on just eight carries. But outside of one long run, he was shut down. As a whole, Kansas City rushed for just 93 yards. But as the season has progressed, the Chargers run defense has reverted back to its old self. They are bad, really, really bad. They allow 146.8 rush yards per game, 30th in the NFL. The yards per attempt rank dead last.

Isiah Pacheco has given the Chiefs running game some juice. He runs really hard and the coaches seem to like him. Jerick McKinnon even has shown to has some left in the tank. I think Kansas City will utilize the ground game a bit more this time around.

The Chargers are immensely talented. There is no doubt about that. But there are too many things working against them. The injury bug is one of them, obviously. But not having an actual home field advantage is truly difficult for any team to overcome. It’s hard to play in front of your home crowd when week after week there are more road fans there.

There is also a rather large coaching disparity. Andy Reid is viewed as one of the best coaches this century while Staley is a defensive coach who runs an awful defense. I believe in Herbert as a stud in this league. I believe in the Chargers talent when they are healthy. But there are too many reasons to believe the Chiefs will all but clinch the division this week.